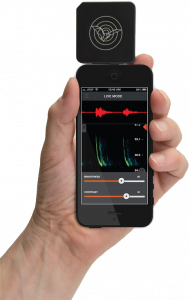 Wildlife Acoustics have recently been investigating a problem where first generation (black) Echo Meter Touch units are not working with devices running iOS 11. They have now developed a firmware update which will fix this issue.

Affected models will need to be returned to one of the Wildlife Acoustics service centres: these are located in the US, Australia and the UK. The update will be performed free of charge and your device shipped back to you as quickly as possible.

Only modules with serial numbers greater than EMT00494 are affected. Second generation (red) Echo Meter Touch 2 units are not affected.

Please use the following links to download a return form:
US and Australia repair form
UK repair form

Once units have been updated, any further alterations to the firmware will be able to be performed using a normal app update.

As a gesture of goodwill, Wildlife Acoustics will be donating US$10 for each module that is repaired before 31st January 2018, split between Bat Conservation International and the Bat Conservation Trust.