Looking for some inspiration for activities during 30 Days Wild? Why not take a stroll around sunset and see if you can find some bats. If you have a bat detector then you can also listen to the ultrasound calls they produce and have a go at working out which species you’re seeing and hearing. Plus, an evening walk also gives you a chance to see what other nocturnal animals are out and about – owls, foxes, badgers and toads are all more active at night and, if you’re lucky and in the right place, you might also be fortunate enough to hear a Nightjar.

• Bat detector – For beginners, a heterodyne detector is a great choice as they are economical and easy to use. Simply tune it to the frequency that you want to hear and then listen through the speaker or with a pair of headphones. If you want something a little more advanced, the Echo Meter Touch 2 connects directly to your phone and lets you view and record the bat calls, as well as suggesting the most likely species that you’re listening to. (If you don’t have a bat detector, you can still go for a walk at dusk and look for bats flitting beneath the trees and across the surface of the water).
• Torch – Not for seeing the bats but for finding your way safely in the dark!• Warm clothing and sensible footwear – Make sure you have enough warm clothes for when the temperature drops after sunset, and footwear that’s suitable for the chosen terrain. A thermos with a hot drink is also a good idea!
• Guide to bat frequencies – If you’re less familiar with bat detecting then a list of the frequencies at which you are most likely to receive the strongest signal for each species is a good thing to have with you. This simple pdf can be printed out to carry with you, or why not take a look at this guide from the Bedfordshire Bat Group for more detailed information on identifying bats using a heterodyne detector. The FSC Guide to British Bats is also a good choice and provides lots of information on identifying bats in flight.

Bats are most active from April to September and the best time of day for seeing and hearing them is around sunset. If you’re walking to a location where you will be using your bat detector or hoping to see bats, then make sure you set off with plenty of time to get there before the sun sets. And don’t forget your torch – even though it will be light when you set out, you’re likely to need it on the way home.

Parks and woodland, especially those with aquatic areas such as ponds and lakes, are great places to find bats. If you can find a walk that covers a variety of habitat types then this will increase your chances of seeing/hearing more than one species. Make sure that the route you choose is safe and accessible and that you know where you’re going – places can look very different at night than they do in the day and it’s easy to lose your sense of direction if you’re not on a clearly marked path.

If you don’t want to venture far from home, then you can also look and listen out for bats in your garden. Near hedges or trees is usually a good place to focus your attention.

Once sunset is approaching, simply turn your bat detector on, keep as quiet as you can and watch and listen for any bats. The earliest species to emerge tend to be the pipistrelles and noctules. Of these, common and soprano pipistrelles are the most frequently seen. For this reason, it is worth setting your detector to 45 or 55kHz (or switching between the two periodically) to see if you can pick up any sounds. If you can see bats flying but don’t hear any sounds at these frequencies, then try scanning through all frequencies slowly to see which produces the most significant and clear response.

If you are near water and see bats skimming the surface, then these are likely to be Daubenton’s bats. As with the common pipistrelle, Daubenton’s bats produce the strongest echolocation signal at around 45kHz. (They also tend to emerge later than pipistrelles, so you may have to wait until later in the evening to catch a glimpse of these!).

Once you become used to using your detector, you will become accustomed to the different types of noises produced by different species and, in combination with where and how the bats are flying, will become more confident in deciding which species you are looking at and listening to.

If you want to find out more about bats, the Bat Conservation Trust website is a great resource and offers information on all 18 species of bat found in the UK. They also provide a list of local bat groups and coordinate the National Bat Monitoring Programme. Surveys cater to different levels of experience and knowledge and are fun and rewarding to carry out. Some don’t require any equipment, so you can take part even if you don’t own a bat detector.

Head over to nhbs.com for our complete range of bat detectors and take a look at our blog post for more tips for beginners.

The RSPB website is a great place to hear common bird songs and will help you to distinguish between different types of owls. The most common species you are likely to come across are Barn Owls and Tawny Owls. You can also hear an example of a Nightjar call on the website. 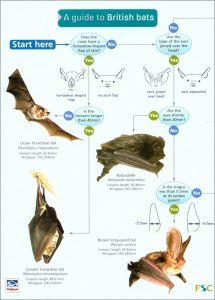 This fold-out guide includes 16 species of bats that live and breed in Britain and has two parts: a guide to identifying bats in flight using bat detectors, flight patterns, size, habitat and emergence time after dusk; and a key labelling the different body parts of a bat for identifying them in the hand. 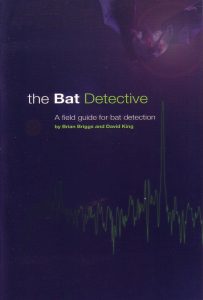 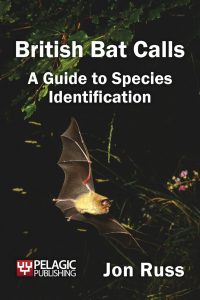 Covers topics such as the properties of sound; how bats use sound; bat detection methods; recording devices; analysis software; recording techniques and call analysis. For each species found in the British Isles, information is given on distribution; emergence times; flight and foraging behaviour; habitat; and echolocation.

Image credits:
(a) n51_w1150 from the Biodiversity Heritage Library via Flickr