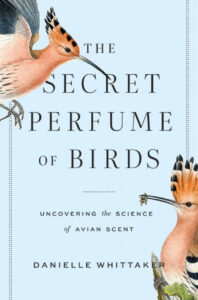 In The Secret Perfume of Birds, evolutionary biologist Danielle Whittaker reveals how she came to dispel the widespread myth that birds cannot smell. Mixing science, history and memoir writing, Whittaker offers a humorous and compelling narrative to describe how birds smell and how scent is important for all animals. The book offers readers a rare opportunity to witness the unfolding journey of scientific research and the surprising discoveries it can make.

Danielle kindly agreed to answer some of our questions below.

How did you find yourself studying the science of avian scent? 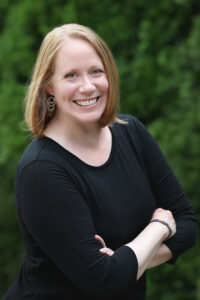 I was originally studying how birds might choose their mates on the basis of certain immune genes, following the idea that animals could prefer mates with different genes than their own, leading to offspring with stronger immune systems. I was struggling to sequence these genes, and I complained to a colleague who happened to be studying bird brains. He said, “I don’t know why you’d study that in birds – information about those genes is sensed by smell, and birds don’t have much of a sense of smell.” I had never heard that before, and the idea that a whole group of animals would lack such an important sense seemed absurd to me. So, I started investigating.

The idea that birds lack a sense of smell has persisted for more than a century despite being disproved by yourself and others. How did you navigate tackling long-held assumptions in the scientific community?

I conducted rather slow, incremental research, following where the questions led me. I started out with simple, clearly defined experiments to test the birds’ reaction to odours from other birds. Then moved on to working with chemists to analyze the information content present in the odours given off by birds. Little by little, the scientists who heard about work in this area started to pay attention, and soon more people started researching bird smells!

I found the most fascinating part of your research to be the discovery that bird scents are linked to their microbiomes. How did you come to look into bacteria and could you expand on their important role?

When I first talked about my research with my now-collaborator Kevin Theis, he looked at the list of compounds I had found in bird odours and said, “those types of compounds are by-products of microbial metabolism. Have you looked at whether symbiotic bacteria are producing these odours?” I had never thought about that possibility before! Kevin studied the bacteria in hyena scent glands and how they produce the odours used by hyenas when they scent mark. Kevin and I teamed up to study the question in birds and we found out that he was right.

In this book, you demonstrated the importance of scent in bird reproduction. I wonder if human-related impacts on our environment are influencing changes to the unique scents of different species, with consequences for their reproductive success – is there any current research being done on this?

I am hoping to look at whether adapting to living in urban environments has affected the microbiome, and thus the scent, of bird populations compared to their non-urban counterparts. It’s very interesting to think about the long term consequences of such changes, but I don’t think there is much research about that yet in any animal.

Your work focuses on the dark-eyed junco, a bird commonly seen in North America. Is there a particular reason why you chose to study this species and do you have any plans to study other birds in this way?

I was a postdoc in Dr. Ellen Ketterson’s lab at Indiana University, and she has maintained a long-term study of dark-eyed juncos for many years. I quickly found that juncos were very easy to work with, and I appreciate that, in many ways, their biology and behavior makes them ‘typical’ northern hemisphere songbirds – which means they are a good model for understanding lots of bird species. I have studied odours in other species as well, in particular the lance-tailed manakin in Panamá. I am always interested in new birds!

Where will your research take you next? Do you have any plans for further books?

Right now, I’m interested in how social behavior changes animal microbiomes through bacteria sharing, and how that might affect odours. I’m also interested in looking at how microbiomes and odours have changed in urban populations of juncos. Beyond my junco research, my professional life has taken yet another unexpected turn, and I am transitioning to a new job as managing director of the Centre for Oldest Ice Exploration (COLDEX) at Oregon State University, where they study Antarctic ice cores to learn about ancient climate change. Maybe I’ll get to visit Antarctica and write about my new adventures!

The Secret Perfume of Birds: Uncovering the Science of Avian Scent
Hardback | £20.50