Book Review: Goshawk Summer: The Diary of an Extraordinary Season in the Forest 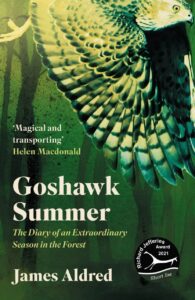 Winner of the James Cropper Wainwright Prize for Nature Writing 2022.

Chronicled in Goshawk Summer: The Diary of an Extraordinary Season in the Forest, wildlife cameraman James Aldred is given the once-in-a-lifetime opportunity to film a goshawk nest during the first few months of the pandemic. Having just completed a migration himself, returning home after filming a cheetah family in Kenya, he was commissioned to begin filming in the New Forest. However, after the adventures of finding a suitable nest and planning how to set up the shoot, lockdown began. The everyday hustle and bustle of everyone going about their daily lives stopped. In the spring months of 2020, with everyone staying at home, no cars on the road, the absence of aeroplane vapour trails crisscrossing the sky, an eerie quiet descended. And perhaps most importantly, lockdown meant no more visitors to the New Forest – except for James.

After harpy eagle attacks, being chased by venomous snakes, and almost being knocked out of a tree by an elephant, you’d think Aldred wouldn’t have much excitement for our native wildlife. However, the awe that Aldred has for not just goshawks but for many of our species shines through in this book. For all its named ‘Goshawk Summer’, this book reads like an ode to the threatened aspects of Wild Britain. It is a whistle-stop tour of our countryside, from instructions on the management of heathland and the place muntjac have in our ecosystems, to the plight of the Dartmoor warbler, pine martens, and the curlew, and even the cultural relationship we have with foxes.

The wealth of experience he has gained over 25 years of working in the industry is clear throughout this book. Passages are filled with rich tidbits of wildlife encounters, such as the time he found all six native reptile species in one morning. Each sighting and mention of a species is accompanied by a short tale or a piece of history. Often, these sightings are compared to Alred’s experiences with more exotic ones, such as the pine marten with the yellow-throated marten in Borneo, a group of tumbling fox cubs with the cheetah family in Kenya, and the goshawk as “our very own mini-harpy”. It is a welcome reminder that UK wildlife can be just as magical and mysterious as that of far-flung places.

Written from field notes kept at the time, the internationally experienced wildlife cameraman dives into the wildlife of his childhood haven of the New Forest. He describes the lack of human activity and disturbance as a glimpse into paradise, which, through his engaging observations, we too can experience. The goshawks are the true highlight of this book, as Aldred gives us a window into the seemingly timeless forest away from the jumble and stress of modern life. Following the weeks and months of Aldred’s shoot, we see the day-to-day workings of a goshawk nest and the trials and tribulations of a species once hunted to extinction. While watching the development from eggs to fully fledged juveniles, Aldred tells the history of this previously highly persecuted species.

As lockdown eased and travel was allowed, the spell is broken and it seems that suddenly everyone is using natural spaces. Car parks and roads fill and forest paths become alive with walkers, music and cyclers. Unfortunately, while many reported this as the public’s increasing appreciation for our natural landscapes, Aldred has a different opinion. With the pandemic always running in the background, he documents the impacts of the sudden rush to reenter the world. From the increase in noise, litter, risky barbeques, irresponsible drivers and dog owners, the newfound peace of the New Forest seems shattered. The forest is described as a habitat that “has been abused for centuries” and Aldred reaffirms the emerging narrative that we should step back to give nature space to breathe and recover. Throughout Goshawk Summer, Aldred issues a strong call for people to be more conscious and considerate of their behaviour in nature, particularly around nesting bird season.

Returning in February 2021, almost eight months after watching the goshawk chicks fledge, Aldred once again encounters the goshawk female. He notes a feeling of elsewhereness within the forest, of outside being England and inside “somewhere much further north”. Goshawk Summer mirrors this, providing a fascinating glimpse into the perspective of a wildlife cameraman and a welcome break from the clutter of the outside world. This book was awarded the James Cropper Wainwright Prize for Nature Writing 2022.

Goshawk Summer: The Diary of an Extraordinary Season in the Forest
By: James Aldred
Paperback | June 2022