In search of Odonata: an interview with ‘Dragonflight’ author Marianne Taylor

National Dragonfly Week is fast approaching, so in our quest for things Odonata-related we interviewed Marianne Taylor – author of Dragonflight: In Search of Britain’s Dragonflies and Damselflies. The book documents the author’s adventures around Britain over two summers, in search of as many species as possible… 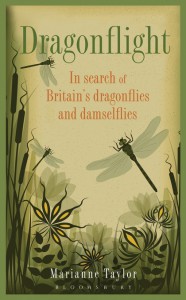 As a keen wildlife watcher from an early age, what drew you in particular to the passion for dragonflies which led to the writing of this book?

I have always enjoyed seeing dragonflies and damselflies when I was out birdwatching, but it wasn’t until I began taking wildlife photographs seriously, in 2009-2010, that I started to really appreciate Odonata. Photography has made me want to look at all wildlife in new ways, and I found the forms of dragons and damsels very appealing. I also quickly developed an interest in taking flight photographs – initially of birds but that quickly expanded to include everything that flies. As relatively large targets, dragonflies make challenging but very satisfying subjects for flight photography. And my geeky need to catalogue all my images correctly forced me to take on the challenge of properly identifying every dragon and damsel that I photographed. Learning about identification went hand-in-hand with learning distribution, behaviour and other aspects of their ecology.

You have spent two summers immersed in dragonfly and damselfly-spotting – and have encountered the majority of established British species.  How has such a dedicated involvement over a set period added to your knowledge of the natural history of your subject? Any surprising discoveries? There must be nothing like prolonged in-the-field focus for gaining an intimate appreciation of their behaviour…

I’d certainly not say I’m any expert, but I have learned a huge amount in the last two years, both from books as I ‘revised’ my subject, and from first-hand observation. I can now answer most questions put to me about Odonata by interested laypeople. What has surprised me most is the complexity of their behaviour, in particular territorial and courtship behaviour. I was also absolutely fascinated to see damselflies apparently ‘mobbing’ large dragonflies – if that’s really what it was, that is a sophisticated response to a  dangerous predator that I would never have expected to see from an insect. I would love to learn more about Odonata intelligence. I am quite convinced that they have some awareness of, and interest in, humans! I would also love to know more about their behaviour prior to adulthood.

Do you have a favourite, or stand-out, Odonata encounter from the book?

The morning spent at Strumpshaw Fen is what comes to mind – the Norfolk Hawker (see gallery – below) that finally gave itself up after a very long search, quickly followed by the utterly charming female Scarce Chaser that was, hands down, my favourite individual dragonfly from the whole two years. Two new species in the space of half an hour, both of them allowing prolonged and close-range observation. I was also really impressed by the damselflies (I only mentioned one in the book but there were several) which I picked out of spiders’ webs – it was great to have the opportunity to study them very closely and watch how deftly they cleaned the spider silk from themselves before going on their way.

Have you continued your search this year?

I have continued to watch and enjoy Odonata on my local patch and elsewhere when weather has permitted. I was also lucky enough to visit Sri Lanka in April, where I photographed and identified as many of the amazingly diverse local Odonata as I could. I have not sought out any new species in Britain so far this year, but that may be about to change as a new colony of Red-veined Darters has been found not far from home, and I’m hoping to pay them a visit next week. I am also very much hoping that RSPB Rainham Marshes will draw in another Southern Migrant Hawker this summer/autumn and that I’ll get to see it this time!

And finally what would be your top tips for aspiring dragon/damsel enthusiasts who want to encounter more of these magnificent beasts for themselves?

Establish a garden pond – even a small one may well be used by the commoner damsels. Always walk slowly and check low-level waterside vegetation – this is where resting and newly emerged dragons and damsels may be found, and they will let you look at them much more closely than the more mature and lively ones will. Try to spend a couple of hours at least at a site, as most species behave differently at different times of day – for example, many only engage in courtship behaviour during the warmest hours of the day. Remember that the chaser, skimmer and darter dragons in particular are creatures of habit and like to visit the same perching spots again and again, so if you disturb one from its perch, just loiter nearby and it will probably come back. To improve your chances of seeing scarcer species, regularly check the sightings pages at the British Dragonfly Society’s website to check where and when they are being seen. Take photographs! It helps greatly with identification to have a static image you can study at length, and you can get excellent macro images from most point-and-shoot digital cameras these days.

Visit Marianne Taylor’s photography and wildlife blog, The Wild Side

Gallery of images from Dragonflight, taken by Marianne Taylor: