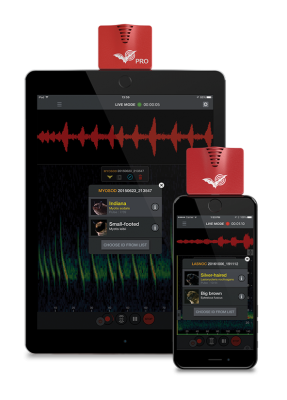 First released in 2017, the Echo Meter Touch 2 (EMT2) and Echo Meter Touch 2 Pro (EMT2 Pro) from Wildlife Acoustics are highly popular bat detectors for naturalists and professionals alike. By plugging the units directly into your phone or tablet, your device is transformed into a fully functional, full spectrum bat detector. The free Echo Meter app (available on the App Store and Google Play Store) allows the user to watch live, real-time sonograms as bats pass above.

The EMT2 can be purchased as either an iOS model (with a lightning connector) or an Android model (with a micro-USB connector). We highly recommended checking the list of compatible devices on the Wildlife Acoustics website before purchasing your EMT2 (see compatibility of phones and tablets here for iOS and Android). This list is not exhaustive and is continually updated as further models are tested.

When using in conjunction with an Android device with a USB-C connector, an adapter will be required. As of 2021 these are now included for free with all Android Echo Meters, an addition we are sure will be greatly appreciated by customers going forward.

The EMT2 Pro is very similar to its counterpart, however additional features and a higher quality microphone make this option more suitable for professional ecological surveys and acoustic analysis. Adjustable gain (Low -12dB, Medium or High +12dB) is one particularly helpful addition. For a full break down of the differences between the EMT2 and the EMT2 Pro please see Wildlife Acoustics’ comparison page.

We plan to further test and compare the EMT2 and EMT2 Pro for a future post. On this occasion we only tested the EMT2 – but the set up and use is fundamentally similar for both models. 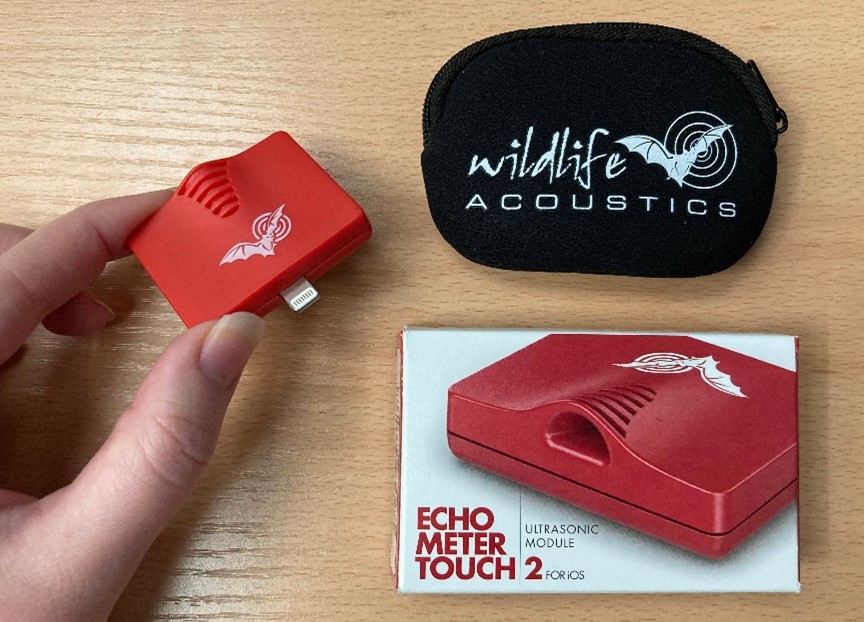 During August 2020 we took several EMT2 units to a nearby woodland to survey for the presence of bats. The Android units were used in conjunction with a Samsung Galaxy Tab S3 (requiring the micro USB to USB-C adapter) and the iOS units used with an iPhone SE 2020.

The EMT2 is incredibly lightweight and small, weighing just 20g and measuring 48 x 35mm. Supplied in a small pouch, the detector is perfectly pocket-sized. For peace of mind, we connected a keychain to the pouch to keep it safely clipped to the inside of our bag.

Set-up was incredibly easy; we simply downloaded the free application, plugged in the device and immediately began recording. It is worth noting that, when plugging the EMT2 into the phones without an adapter, the phone cases had to be removed in order to allow proper connection.

We made sure that the Trigger Minimum Frequency was set to 12kHz, the level recommended by Wildlife Acoustics in order to stop noise recordings while not missing any species of bat. On the ‘Auto ID Selection’ tab, we chose the correct region and country allowing the impressive auto-ID feature for UK bat species to be enabled (see video below on how to change these settings).

The EMT2 then automatically recorded any bat activity detected above 12kHz and applied a suggested species identification based on the waveform and frequency. The app offers several ways to share these recordings, but we chose to directly plug our phones/tablets into a computer to transfer the files directly. 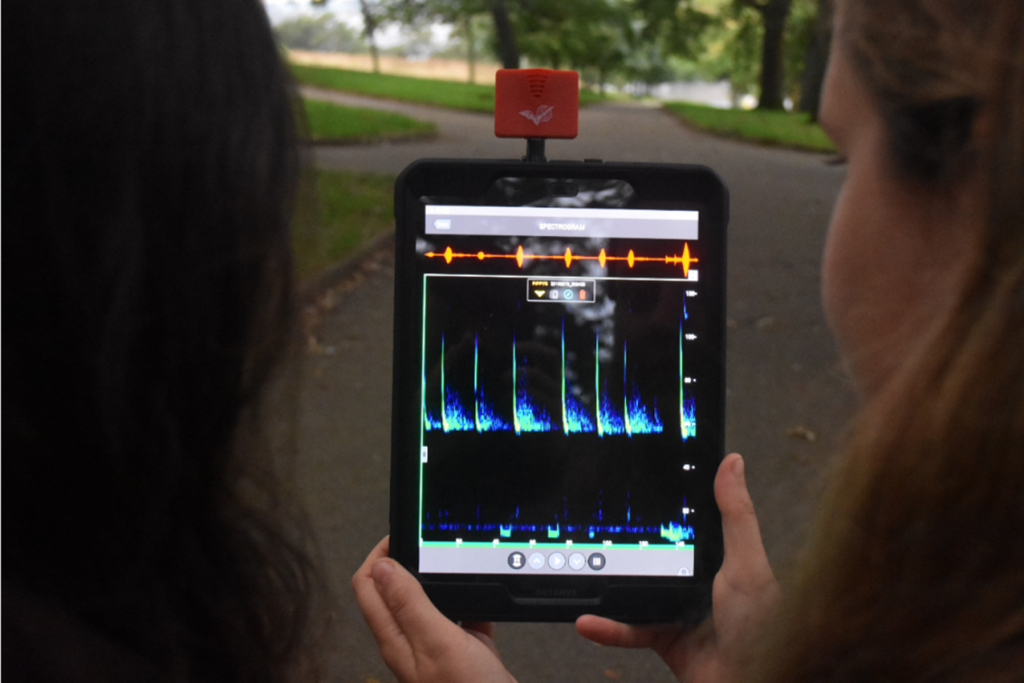 The Echo Meter is incredibly intuitive and easy to use, so certainly suitable for beginners and professionals alike. Any questions or issues can easily be resolved via the User Manual, found under the Information tab on the app and offered in English, French and German. Personally, we preferred this digital option rather than having to flick through a paper copy during a dark evening survey. However, copies of the user manuals can be found here, for those who would prefer to print a hard copy.

The on-screen live sonograms were particularly impressive and allow surveyors to get an idea of the potential species present while still in the field. While waiting for the bats to emerge, we enjoyed watching the calls of birds and crickets (see our blog post here on monitoring Orthoptera using bat detectors) – an unexpected advantage of the EMT2. It is certainly understandable why the EMT2 is so often used for community engagement at bat walks and BioBlitzs around the country.

We found that, for the species common in our area, such as Common Pipistrelle (Pipistrellus pipistrellus), Soprano Pipistrelle (Pipistrellus pygmaeus) and the Noctule (Nyctalus noctule), the auto-ID feature appeared mostly accurate. Although, on one occasion before dusk we found that a bird call triggered a Common Pipistrelle identification. It is important to note that no Auto-ID feature can be 100% accurate, and Wildlife Acoustics make it clear that users should always manually verify the identification.

The automatic triggered recording worked very smoothly and did not appear to miss any bat activity. Despite this, it was reassuring to know if we noticed something we wanted to record, we also had the option to manually trigger recording – another feature that would be useful if wanting to listen to non-bat species. Each recording was GPS tagged, a neat feature that tracked our transect throughout the evening. When sorting through recordings, the option to sort by species was helpful to move noise and ‘No ID’ audio clips.

The only limitation we found with the EMT2 is how quickly our batteries drained. This is of course not a fault with the EMT2 itself and is to be expected with continual recording, but it is worth considering your phone or tablet’s battery life may impact your use of this detector.

Overall, the Echo Meter Touch 2 is a fantastic detector that is very affordably priced for the number of features it offers. The free app is continuously updated, and newly developed species classifiers added.

Visit nhbs.com to view our full range of bat detectors. If you have any questions about our range or would like some advice on the right product for you, then please contact us via email at customer.services@nhbs.com or phone on 01803 865913. 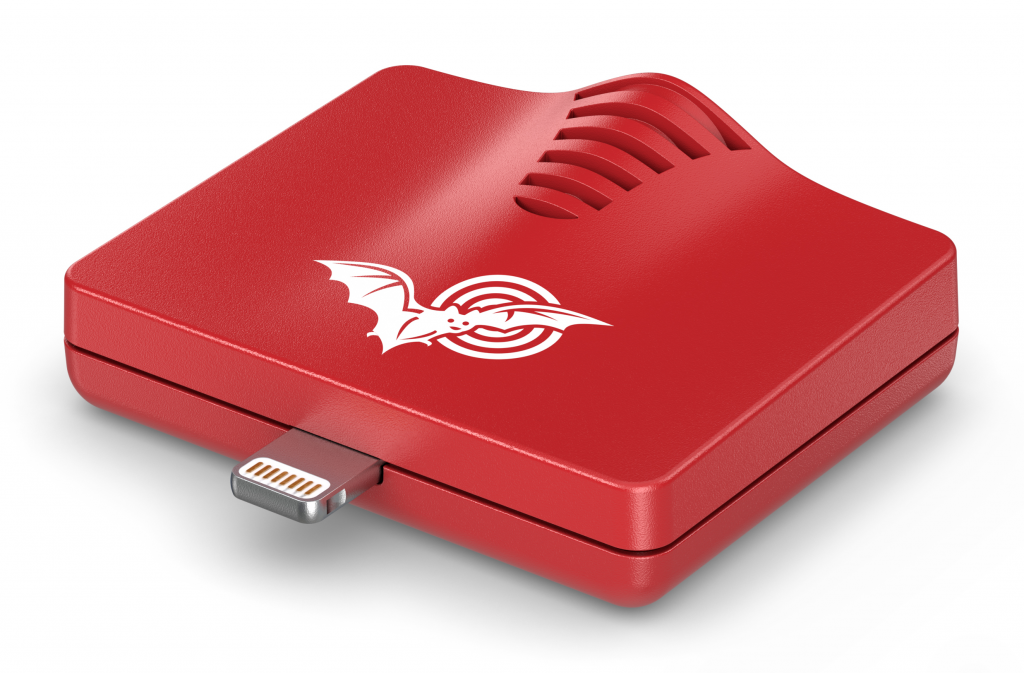