The NHBS Guide to Fungi Identification

From mould to yeast, fungi are a diverse kingdom with over 15,000 species in the UK. Fungi are made up of different microscopic thread like bodies called hyphae, and collectively hyphae form mycelium. Mushrooms or toadstools are the reproductive, umbrella shaped fruiting bodies of certain fungi. These organisms can be found in almost every natural habitat, but more kinds of macro-fungi tend to be found in woodlands, as they provide a rich and continuing nutrient source and a wide range of microhabitats.

Autumn is a great time of the year to explore the fascinating world of fungi, as most species enjoy the slightly cooler and wetter conditions. To those familiar with identifying plants, birds and mammals, mushroom and fungi identification can be a tricky task requiring a different kind of approach. However there are some distinct, common species that are much easier to identify than others, and getting a great ID book can really help. In this blog we focus on 10 common, easier to identify types of mushrooms and toadstools found in the UK, alongside some key characteristics and where to find them.

Some fungi cannot be identified without a microscope, however those in this blog can be identified using macro characteristics displayed by the fruiting body. Most are umbrella or mushroom shaped with gills on the cap underside. Below are some key characteristics to look out for when identifying:

This blog has not been written to be used for finding edible species, please be cautious as fungi can be highly poisonous.

Identification: In place of gills, this species has spines (stalactite-like projections) under the cap, making it look rather hedgehog like. The spines are paler than the cap, and the cap is creamy, medium-sized and fleshy. Cap is 3-17 cm across. Stem is short and stocky.

Where to find them: On soil among litter, under broad-leaved woodland, in particular with beech or oak, sometimes with other species, including in coniferous woods; often in troops.

Identification: One of the largest fungi in the UK, it is similar in size to a football. The young fruiting bodies are solid, white, thin and smooth and then later turn olive, then finally brown when it opens. When mature it is roughly 20-75 cm across. There is no stem, however it can be connected to the ground by a fine root like filament.

Where to find: Can be found in grasslands, pasture, lawns, commons and roadsides, and can be found in open woodlands, often with nettles and rubbish.

Identification: Has a blue to violet tinged cap and gills when young, however older caps turn tan or grey from the centre. Gills are crowded and grow into the stalk and fade to brown as the mushroom matures. The cap is roughly 5-15 cm across, and the stem 5-10 cm tall.

Where to find: Amongst leaf litter in woods, hedgerows and gardens. Can also be found in grasslands away from trees

Identification: A grey to fawn cap that is at first egg-shaped and then later bell shaped. The surface is smooth and splits into a few tiny scales from the apex, the edges are often wavy and split. Stem is white and hollow. Cap is around 4-8 cm across and stem is 5-15 cm tall.

Where to find: Very common – wherever there is buried wood.

Identification: One of the most iconic toadstools depicted in fairy-tale illustrations.  It has a shiny, scarlet red or orange cap with white wart-like spots dotted across. Cap is 8-20 cm across. The gills are white and free, and the stem is swollen with rings of scales.

Where to find: In mixed woodlands and heaths, mostly amongst birch, pine and spruce.

Identification: Initially cup-shaped and smoothed, the fruiting body develops lobes in the shape of a wrinkled human ear. Soft, gelatinous and a date-brown colour, but when it dries it is much smaller, darker and harder. Upper surface is velvety, and is attached laterally by a small stalk. Up to 8cm across.

Where to find: Commonly found on living or dead wood of elder, but also recorded on many other woody species.

Identification: Known for releasing a foul odour to attract flies which eat the spore-bearing slimy head. The foul smell can be detected far and wide, most often before seeing it. Initially it appears like a white egg which feels soft, but then later splits at the apex and a thick, white hollow stem appears with a polystyrene texture. Head is conical shaped, slimy and olive-green topped by a small, white ring. Grows up to 25 cm tall.

Where to find: Among leaf litter in woodlands and also in gardens.

8. Chicken of the Woods – Laetiporus sulphureus

Other common names: Sulphur Polypore, Crab of the Woods and Sulphur Shelf

Identification: A thick, fleshy, bracket that is fan-shaped and soft to touch. Older brackets become sharp-edged with a dry, chalky texture. The upper surface is initially bright orange or yellow with a velvety touch, this later fades to a creamy-yellow with a smooth, dry surface. The very small pores on the underside are a pale yellow. Bracket is 10-40cm across.

Where to find: Can be found growing tiered mostly on oak trunks but also on sweet chestnut, yew and beech.

Identification: Are cup-shaped and scarlet, however can also be bright orange. Stems attach to the leaf litter making them appear as hollow bowls lying on the woodland floors. Cups are roughly 4cm across.

Where to find: Although not very common it is reasonably widespread, and can be found in damp, shady areas on decaying sticks and branches. It can be found on the fallen twigs and branches of hazel, elm and willow in late winter and early spring.

Identification: This strange fungus appears like an ox tongue or piece of raw meat and oozes a blood like substance when cut. When young the bracket is soft and moist with a pinky-red upperside and broad margin. Older brackets are a liver-brown and much firmer with a sharp edge. The underside has yellow pores which release red-brown spores and often exude a red, blood like liquid. Brackets are about 8-20 cm across and 3-6 cm thick.

Where to find: Usually found low on the trunk of old, living oak trees and sweet chestnut trees, and sometimes on their stumps. 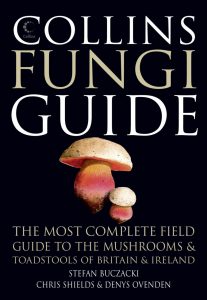 Collins Fungi Guide: The Most Complete Field Guide to the Mushrooms & Toadstools of Britain & Ireland

Nearly 2400 species are illustrated in full colour, with detailed notes on how to correctly identify them, including details of similar, confusing species. 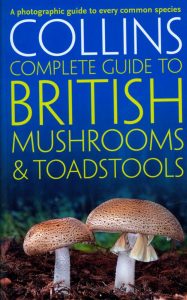 By only covering Britain and Ireland, fewer species are included than in many broader European guides, making it quicker and easier for the reader to accurately identify what they have found. 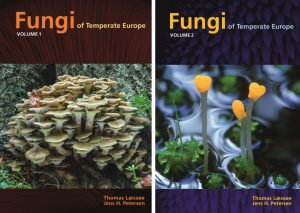 This lavish two-volume set treats more than 2,800 species of fungi across the region. 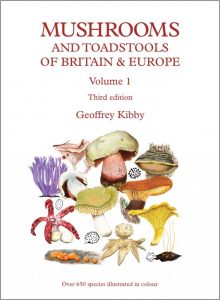 Geoffrey Kibby is one of Britain’s foremost experts on identifying mushrooms in the field and has published a range of excellent guides/handbooks to mushroom identification. 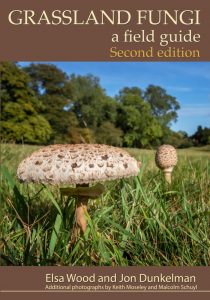 The second edition draws on an additional three years of surveying done over a wider area, adding 23 new species to the 177 already described in the first edition 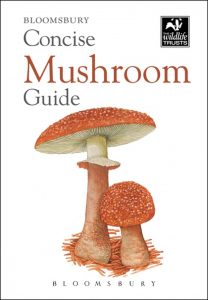 This illustrated mini field guide is packed with information on 200 species of fungi found in Britain and the near Continent. 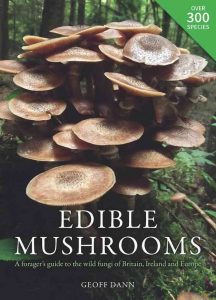 Edible Mushrooms: A Forager’s Guide to the Wild Fungi of Britain, Ireland and Europe

An up-to-date, comprehensive and brilliantly illustrated book on fungi foraging in Britain and Europe. It covers every known edible species, and all the poisonous groups, as well as a few other extremely common ones. 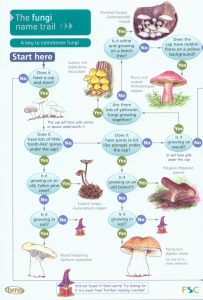 The Fungi Name-Trail: A Key to Commoner Fungi

Key to some of the more easily recognised fungi present in Britain’s woods and fields. The name trial takes you through a series of yes or no questions to help you identify your fungi.