In a short space of time rewilding has grown to become a powerful force in conservation. The idea of giving nature the freedom and space to forge its own path is not just inspiring, but also raises deeper questions about our relationship with the natural world and how we best serve wildlife and ecosystems through a period of enormous challenge for conservation. To explore these and other aspects relating to rewilding, British Wildlife is launching a new series: Wilding for Conservation. The series started with two articles in the February issue, along with an editorial in which Series Editor Rob Fuller and BW Editor Guy Freeman explain how they hope to contribute to the discussion on rewilding and its role in conservation in Britain. An abridged and edited version of the editorial is included below.

Deceptively simple in essence, rewilding resonates with something latent in many of us – a longing for a wilder world. It has captured the imaginations not only of conservationists, but also of landowners, policy-makers and, especially heartening, many young people too. Enthusiasm abounds for the idea that natural processes can be harnessed as solutions to some of our biggest environmental challenges, including climate change and biodiversity loss. Rewilding has rapidly become a central element in this ‘new’ thinking, with many believing that it offers a fresh start for what they see as an ineffective conservation movement presiding over catastrophic declines in nature. But what exactly is rewilding, and what is it not?

Rewilding emerged in the 1990s as a predominantly North American movement, but became strongly embedded in British conservation consciousness somewhat later, partly aided by the publicity surrounding several pioneering projects, such as Oostvaardersplassen, Ennerdale and Knepp.

The publication of Feral by George Monbiot in 2013 undoubtedly also helped to fuel interest. In a remarkably short period of time, rewilding has spawned several conferences, bewildering numbers of papers and articles, several influential books and new organisations, notably Rewilding Europe and Rewilding Britain, founded in 2011 and 2015, respectively.

Interpretations of exactly what rewilding means have proliferated and often ranged far from the original concept. Most advocates, however, would seem to argue that it embraces natural processes without defined outcomes, and ideally operates over large tracts of land. In Britain at least, the enthusiasm for rewilding has met with some scepticism, even among conservationists, which may reflect disquiet about the absence of targets, a perceived threat to what has been achieved in the past, or simply confusion over what all the noise is about. One can legitimately ask whether the ideas are actually new or novel. Approaches guided by natural processes were being promoted long before rewilding became mainstream, while the merits of non-intervention versus habitat management have been discussed for decades in British conservation circles. What distinguishes the rewilding ideas that emerged in North America, however, is their focus on wild land on a grand scale, allowing the unhindered movement of animals, including large predators and their prey.

Discussions of rewilding in more heavily modified European landscapes quickly become entwined with questions of what can be classed as ‘natural’, the extent to which we should attempt to re-create historic environments, and the desirability and ethics of using species introductions to try to replicate processes that existed in the past as opposed to allowing ecosystems to develop a new kind of naturalness. Working to create wilder places for both people and nature is an admirable direction for conservation in Britain, but, given the constraints and small scale of many initiatives, ‘wilding’ perhaps captures their essence better than rewilding could.

Existing conservation approaches have not been able to prevent widespread declines in biodiversity over recent decades, although without them things could have been far worse. Some argue that rewilding (or wilding) is a way to set nature on a better course in our islands, but how can we be sure of this? There are severe limitations on land availability for conservation, especially in the lowlands, and the benefits from rewilding may not become apparent for many years. Are we approaching a point at which we need to rethink what kind of nature and wildlife we want?

British Wildlife has effectively been contributing to the ‘wilding debate’ through articles going back to a time when the ‘R word’ was unheard of on this side of the Atlantic. Notable early contributions include two from 1995, one vigorously challenging priorities in British conservation and arguing that greater attention be paid to more natural vegetation, and a second far-sighted article which echoes this from a different perspective and reads like a blueprint for much contemporary wilding. A special issue in 2009 was something of a milestone, containing a set of articles on naturalistic grazing and rewilding, stimulated by Frans Vera’s ideas about how large herbivores shaped pre-Neolithic landscapes. Topics tackled more recently include the nature of past landscapes, the definition of naturalness itself, reintroductions, natural regeneration of woodland and wilding in farmland landscapes. 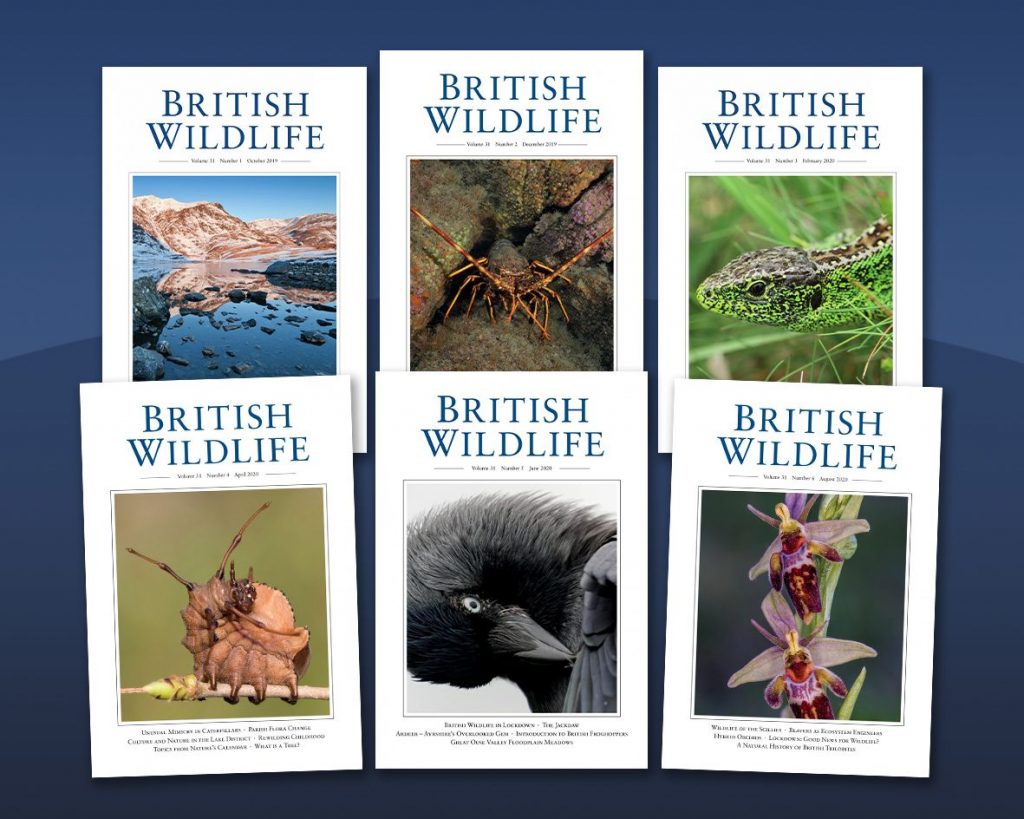 Over the coming months, British Wildlife will be exploring the many facets of rewilding as they relate to conservation in Britain through a new series, ‘Wilding for Conservation’, a title which, we hope, captures the wide range of approaches to letting nature take back control. We start things off in the February issue with two pieces, one expounding a pure approach to rewilding , the other looking at relationships between traditional conservation management and rewilding . The series will examine some of the questions about rewilding raised in this editorial and bring ideas contained within the expanding scientific and cultural literature to a wider audience, while providing examples of what is happening on the ground in the UK and elsewhere. We hope that readers find the series to be thought-provoking and inspiring.

Articles in the Wilding for Conservation series will appear intermittently through 2021 and beyond. Individual copies of the February issue of British Wildlife are available to buy through the NHBS website, while annual subscriptions start from just £35 – sign up online here.