An interview with Erica McAlister 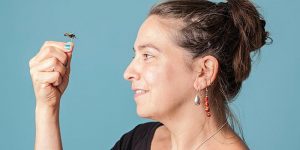 Entomologist Erica McAlister is the senior curator for Diptera at the Natural History Museum, London. In 2017, she authored the very successful book The Secret Life of Flies which looked at their diverse lifestyles. Now she returns with The Inside out of Flies, which is a great popular science book marvelling at their anatomy.

We took the opportunity to ask her some questions about why flies matter to us all.

First off, tell us a little bit about how you got started. Why study flies? Having read your book now, I agree that they are fascinating and beautiful, but presumably, you did not know this when you started?

I have always been interested in nature, but I was more fascinated by the smaller creatures – the ones everyone else seemed to ignore. Insects were an obvious choice and I combined my love for them with my love of ecology from the beginning. Although I had worked with ants and beetles, it was the flies that properly tickled my fancy as they were the most diverse in life cycles and ecological function, and so the most interesting. They got everywhere, they did everything and they were wonderful to observe. I have a liking for all things natural – from decomposing dung heaps to parasitic lifestyles – both of which involve the fabulous flies.

You are quite involved in public outreach, speaking on radio programmes and giving public talks. Most people regard flies with a certain amount of disgust. Do you find it is easy to change people’s perceptions?

Generally, yes. Most people just think about one or two examples of the thousands of species of flies such as the nuisance fliers or the transmitters of disease. So when I  tell them about the hoverflies, the bee flies, the chocolate pollinators, the forensic detectives, the scuba divers and so on, that opens up a whole new world to most people, and when I go on to talk about their gardens being alive with these beneficial creatures, you can see a change in many folks. Flies are animals and are essential for many ecosystems – it is odd that many naturalists seem to want to forget this! 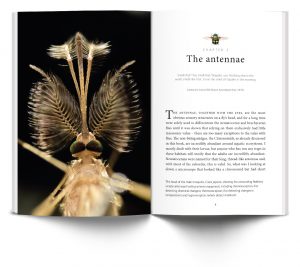 After two decades of researching them, has your own attitude towards them changed?

Nope. In fact, I feel that I have got worse in my obsession with them as I realise that I have so much to learn and not enough time. Initially I was fascinated by their ecology, then their looks, then their behaviour, but there is also their genetics, their mechanics and many more other areas that we need to explore and understand. The more I have read and studied the more I realise that we have still so much to learn.

Your 2017 book The Secret Life of Flies was very well received. The design of your new book The Inside Out of Flies suggests it is a companion to the first book. Why write a second book?

Because there is so much more to write about them. We have thousands of books about mammals and there are just over 6100 of them. There are more flies in the UK than that and living in more extreme environments – the flies have adapted to all sorts of weird and wonderful habitats with a whole range of morphological changes to help them not just cope but thrive. The first book focused on their feeding ecology, this one is about their morphology, but there is still much, much more that I have left out from both of these subjects (I get emails all the time telling me so!) 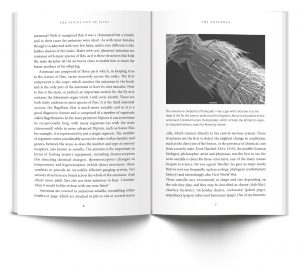 You mention many people seem to think adult flies lack brains, this misconception being fuelled by watching them fly into windows again and again. This may seem like a very mundane question but why, indeed, do they do this?

This is a common question – but the answer is not really known. Firstly, the glass could be disorientating the flies as it blocks out UV-B which are used by the flies to help them navigate. The actual glass may be perceived as something different to them – they would realise that it was some form of wall due to the change in air currents, but we don’t know as yet what and presumably it could be multiple factors. There are many footprints of previous insects that have crawled across that pane and maybe there are hints about food sources (flies taste with their feet) that further distracts them. There is still so much about these creatures that we don’t know.

As you go through each body segment of a fly’s body in this book, you show that there is astounding variation in traits, and you back this up with some fantastic photography. One striking example was of a soldier fly species, Platyna hastata, whose abdomen is almost as wide as it is long, you affectionately call them fat-bottomed flies. Is this another example of sexual selection run rampant?

In flies – there are so many examples of extreme sexual selection and I discuss this throughout the book – from eyestalks to flags on their abdomen to hidden internal modifications. One of my favourites is the fly Drosophila bifurcata that has sperm that is 5.8 cm long and the actual adult male is but a few millimetres! 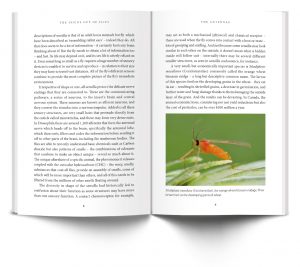 You explain how insect taxonomists use morphological details such as the position and numbers of hairs on their body to define species. I have not been involved in this sort of work myself, but I have always wondered, how stable are such characters? And on how many samples do you base your decisions before you decide they are robust and useful traits? Is there a risk of over-inflating species count because of variation in traits?

Ahhh there is the dilemma that many a taxonomist has faced – is it a true species??? The NHM collection has many thousands of species but often the specimen that the species was described from is the only specimen that anyone has of that species! Only time will tell if it is a true species. However, many of these characters are very stable with many of the bristle arrangements having been around for thousands of years. There is a risk of over-inflating species but then again there is a risk of under-inflating – and taxonomists fall into two groups – the splitters or the lumpers depending upon what they feel are important characters. What we do know for certain is that the sexually derived characters – the genital structures change at a faster rate and so this is why we appear to be obsessed with such things!

There are some fantastic examples in this book of the applied aspects coming out of dipterology as a field of study, with forensic entomology and miniature robotics being good examples. What are some of the most exciting applied developments that you think will make a splash in the near future?

Oh, what a question! I feel that we are on the cusp of many exciting developments – especially in aeronautics and medicine. Personally, I am loving the development of smart needles – the idea of bending these around sensitive structures is incredible and so very useful. But as technology develops so does our ability to look at these creatures and try to mimic their millennia-old adaptations. 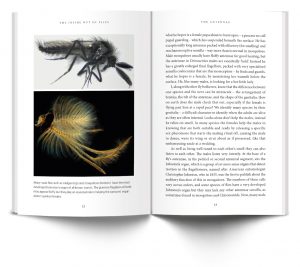 I imagine some aspects of entomology rely on decades- and centuries-old methods from when the field got started. Simultaneously, like most academic disciplines, the field has benefited from technological advances. How have new technologies changed how you work and the sorts of questions you ask?

Yes, absolutely. I can ask so much more from the specimens in the collection at the Natural History Museum now, even though the flies may have been dead for hundreds of years. I can image them inside and out and in doing so I can see what pollen is in their guts or around their mouthparts; I can analyse their DNA and see how the populations developed or when insecticide resistance developed; and I can transfer all of this information around the world in seconds – no longer is research hindered by physical distance or financial constraints as much as it once was. And on a general level, I and many others have the resources of millions of people making observations and taking photos which massively adds to our knowledge. New technologies have made scientists out of all of us.

One of the more remarkable and little-appreciated things you draw attention to is that flies are an important group of pollinators worldwide. There has been much public concern regarding bees, pollination, and the future of our crops. Do we have reason to be concerned about the ecological function provided by pollinating flies?

We need to care about flies as much as all of the other insects that are more commonly talked about. Not only are the adults amazing pollinators but the larvae of many of these species are also carrying out key ecological roles such as predation or decomposition. And often it is only the flies that are the pollinators, especially in the more extreme habitats or crops. If you don’t look after the flies, you will find the world bereft of many food products that everyone loves such as chocolate.

Lastly, has the pandemic influenced your work and that of those around you?

I would say yes. Hopefully, more people have realised how important the natural world is. I have spent the last couple of moths answering questions and identifying flies that folks would not have spent time observing before, and I have seen appreciation grow in all things fly. I think we have realised that we need to work more in balance with our environment and so the work that I, and millions of other entomologists undertake, is now seen with a new appreciation – we are not just going around looking at pretty flies, but are trying to help understand our climate and the impact the changes are having on it, our food security, and the impact of disease and vectors to name but a few examples. 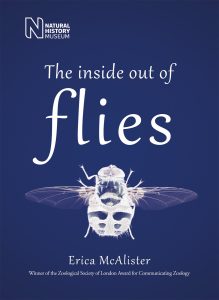