Dean R. Lomax is an internationally recognized palaeontologist, author, television presenter, and science communicator. He is currently a visiting scientist at the University of Manchester and is a leading authority on ichthyosaurs. He is due to publish a remarkable popular science book, Locked in Time, that looks at what the fossil record can tell us about behaviours of extinct animals by way of fifty remarkable examples. Leading up to publication, we reached out to Dean and asked him some questions.

Could you tell us a little about your background and where the motivation for this book came from?

My passion for palaeontology stems from my childhood fascination with everything dinosaur. In high school, I was not very gifted academically and my grades were not good enough to attend university so at the age of 18 I ended up selling my possessions – including my cherished Star Wars collection(!) – to help fund a trip to excavate dinosaurs at the Wyoming Dinosaur Center in the USA. That trip changed my life and formed the backbone of my career. Not only did it provide me with the necessary experience I needed to help build a career in palaeontology, but it is where the idea for Locked in Time originated. Whilst looking at the museum displays, one particularly outstanding fossil caught my eye. A trackway with its maker preserved at the very end – an animal that had literally been caught dead in its tracks. I had never seen anything like this fossil before, in books, in museums or in documentaries. This prehistoric story was preserved in time for all to see. I was hooked. It gave me that spark to discover more about prehistoric animals and their behaviours and I even ended up describing this particular fossil in the scientific literature.

In your introduction, you mention the field of palaeoethology (the study of fossils to infer behaviour). How big of a subfield is this in palaeontology? Are there specialised palaeoethologists, or is it more a case of palaeontologists contributing to this field whenever someone finds something?

Palaeoethology is a fascinating subject that allows us to explore the study of behaviours of extinct species through the evidence preserved in fossils. It is a small subfield of palaeontology, due mostly to the rarity of fossils with direct and reliable evidence of behaviours preserved. There aren’t necessarily any specialised palaeoethologists, but rather those palaeontologists who contribute to the field when something is found and described; however, palaeontologists may often be entirely unaware that they are actively contributing to the field because the idea of ethology/behaviour in the fossil record can easily be overlooked. Having said that, there are some palaeontologists that could easily add ‘palaeoethologist’ to their CVs, most notably those who work with amber which often preserve snapshots of behaviours in action. A real pioneer in the field of palaeoethology was Dr Arthur Boucot. He spent years searching for evidence of behaviours in prehistoric animals, writing numerous papers and academic monographs, and even introduced the term “frozen behaviour” for those instances where an extinct organism was preserved in the midst of some type of behaviour. Delving into his history and research was genuinely inspiring. As I have researched and published on multiple specimens and have written this book, I guess this probably qualifies me as a palaeoethologist too.

Ideas about behaviour are important to those who produce artwork depicting prehistoric lifeforms, i.e. palaeoartists. Do you find there is much of an exchange between palaeontologists and palaeoartists to try and depict behaviour in artwork according to the latest science?

The field of palaeoart has grown immensely over the last twenty years. In fact, several palaeoartists have become excellent scientists in their own right, including Bob Nicholls (the artist for this book), who has co-authored multiple scientific studies. Good palaeoartists stay informed of the latest scientific research and discoveries, with several often working very closely with palaeontologists to ensure their reconstructions are scientifically accurate. Subsequently, when based on the latest science, thoroughly researched palaeoart reconstructions are anatomically plausible. However, that said, practically all aspects of behaviour depicted in palaeoart are not based on direct evidence but assumptions. Usually, the best a palaeoartist can do is look at an extinct animal’s anatomy and environment and speculate about its lifestyle and behaviours. This is why fossilised evidence of behaviours, like those contained inside this book, are so precious and important to study and understand. These remarkable fossils tell us that prehistoric creatures were not movie monsters (prehistoric life, especially dinosaurs, are too often portrayed as roaring monsters!) but real animals that behaved in a variety of familiar and surprising ways.

What have technological advancements contributed to this line of inquiry? Are palaeontologists going back to old fossil material to reexamine them with new tools and finding new evidence of fossilised behaviour?

The use of flashy, high-tech computers, scanners and the like have helped to unlock an entirely new world of information contained in fossils. As a result, not only are newly discovered fossils subjected to this technology but much older fossil discoveries, where none of these technologies were previously available, can now be reanalysed with a fresh approach, breathing new life into old fossils as it were. This has led to some exciting discoveries of fossilised behaviours in specimens that have otherwise been deemed as having little to no research value.

Whether dinosaurs or early mammals, prehistoric organisms were faced with many of the same basic challenges as animals alive today. Has the fossil record revealed any examples of behaviours that were unique and now effectively extinct?

These types of questions are what get me excited about unravelling the mysteries of prehistoric behaviour. In many cases, “the present is the key to the past”, as geologist Charles Lyell famously introduced in the 1800s, and this definitely holds true with understanding behaviour. For example, on a basic level, we know that some groups of mammals live in herds today and that some extinct mammals also lived in herds millions of years ago (we have good fossil evidence for this). However, the natural world is filled with so many incredible acts of behaviour that you might expect the fossil record would reveal something unique. As such, perhaps one of the most unusual and apparently unique behaviours was recorded in an ancient roughly 430 million-year-old arthropod nicknamed the ‘kite runner’. The young of this arthropod were literally tethered to the parents via long spines. It appears to be the only known occurrence of this type of brooding behaviour known among fossil or living arthropods.

Rather than body fossils, past behaviour is often deduced from so-called trace fossils or ichnofossils. Nests, fossilised footprints, and trackways must be fairly easy to recognize. But what about the harder-to-identify traces? Do palaeontologists frequently encounter suspected ichnofossils where they don’t know who made them, how they were made, or perhaps even what they represent?

Yes, palaeontologists (or palaeoichnologists) frequently encounter mysterious trace fossils that are difficult or near impossible to identify or decipher. By their very definition, trace fossils represent evidence of behaviour, so we can say with confidence that an ancient animal made a nest, left its tracks or created a burrow, but they generally do not provide all of the tell-tale signs that allow us to identify what organism made it, how it was made or even what the trace might really represent. To find definite answers, we have to go a step further. In much rarer circumstances some trace fossils provide more than a ‘simple’ track or burrow and may be directly related with its maker, such that the body fossil is present inside the burrow or at the end of the track. In other examples, a track might show where the animal walked, stopped, sat down and then walked away, or a burrow might preserve evidence of scratch marks that could indicate how the burrow may have been constructed and by whom. These types of fossils provide much more information about specific moments (and behaviours) in deep time.

Were there any examples of fossilised behaviour that did not make the cut for this book but that you would have loved to include, or any noteworthy recent discoveries?

Having spent a substantial amount of time combing through hundreds of scientific papers and books, and examining specimens in museum collections, my initial plan was to tell the story of prehistoric behaviour through 100 fossils, rather than 50. It was incredibly tough selecting 100 fossils, so cutting this in half was much harder! I had to rank each of the fossils against one another, in terms of the type of behaviour, type of animal and so forth. This meant some really unusual specimens, like the aforementioned ‘kite runner’, did not make the final cut. One fossil that I would have really liked to include, and which has received worldwide media attention recently, is the so-called ‘Dueling Dinosaurs’ fossil, which appears to preserve a Tyrannosaurs and Triceratops locked in combat. I opted not to include the specimen as it has yet to be formally described, although I do make some subtle references to it. I’m very excited to see what research is revealed from this fossil, especially as only one fighting dinosaur fossil has been described, which inspired the book’s cover.

Finally, what are some of the biggest unanswered questions when it comes to fossilised behaviour? What would you love to find?

There are so many ancient groups and species that it would be easy for me to rattle off a list of some of the biggest unanswered questions about fossilised behaviour, but the reality is that we have only really scratched the surface. We have so much to learn when it comes to fossilised behaviour. After all, inferring and attempting to understand behaviour in long-extinct organisms is incredibly hard and is made even more challenging when evidence of behaviours are not preserved. It is also vitally important to remember that, by its very nature, the process of fossilisation is already an incredibly rare event, so to have any form of evidence for ancient fossilised behaviour preserved is genuinely astonishing.

Ooh, what would I love to find! I’m torn between several imaginary fossils, but if I was forced to choose one then it would have to be finding a dinosaur dead in its tracks. The thrill of following in the footsteps of a dinosaur only to find its skeleton lying at the very end of the track would be the ultimate dinosaur detective story. 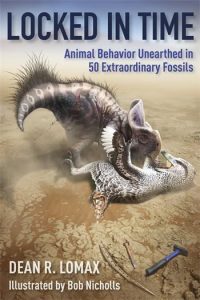