Once a familiar sight motionless above road verges, the population of kestrels has sharply declined, a decline which continues as the intensification of agriculture and the populations of other raptors increases.

Richard Sales comprehensive new study investigates the decline, after first exploring all aspects of the kestrels’ life, from plumage and diet through breeding to survival.

The book includes data from Richard’s recently completed four-year study in which video cameras were installed to watch breeding behaviour in a barn in southern England.

Richard visited us to sign copies of his new book and answer our questions about how his expertise in physics and engineering have been used to find out more about this illustrious falcon.

I am from Somerset and have maintained my West Country accent all my life, though I haven’t lived there for many years. I did physics as an undergraduate, then did an MSc in theoretical physics (studying energy loss from general relativistic stars), then a PhD in astrophysics flying a large (50kg) gamma-ray telescope suspended under a 3 million cubic foot balloon filled with hydrogen. The telescope flew at 105,000ft and discovered the first-ever gammar-ray pulsar. I then worked as a glaciologist in Switzerland for a while, and then took a job in the UK power industry.

When did you develop an interest in birds?

My father was bird lover and tailored our family holidays around the breeding season, so we went to Exmoor to watch buzzards and so on, rarely going anywhere near a beach and more often than not learning how to survive in poor weather. Both my brother and myself believe we owe our interest in birds to those trips. My father taught us how to watch birds, not just to learn their names so we could impress other people, but to really watch them. That has stayed with me ever since. I was more academic than my brother (who is a chemist – not a pharmacist, a chemist) and Dad wanted me to study zoology, but I chose physics. I also chose climbing as a primary hobby when I was teenager, first rock faces, then mountains, which is why I finished up in Switzerland when I was offered a post that allowed me to live at the Jungfraujoch and climb every weekend.

We lost our grant money in Switzerland, so I had to find another job. But as the years went by birds became more and more important to me. The dual love of birds, and snow and ice drew me to the Arctic and eventually I took very early retirement – I was only in my 40s – so I could spend more time travelling in the Arctic, supporting myself by starting a physics consultancy and writing books. One of the first Arctic-based books was a Poyser on Gyrfalcons which I co-authored with a Russian friend, Eugene Potapov. For that book I was watching gyrs in the Canadian Arctic. There was breeding pair and I watched the male hunting Arctic Ground Squirrels. He was coming from very high and a long way off and I noticed that he was not travelling in a straight line and couldn’t understand why not since the shortest route is the quickest. That lead me to investigate the eyes of falcons and also to build my own Inertial Measurement Unit (IMU) so I could track hunting falconry birds. 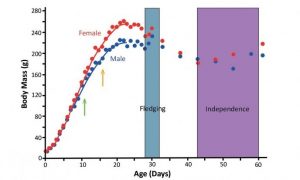 Has data from the Inertial Measurement Units (IMUs) you have developed been used in your books?

I flew my first generation IMUs on all four UK breeding falcons – each time on falconry birds. The unit I flew used the satellites to give me track position and had a barometer for height data (as height from satellites is only accurate if there are a lot of satellites in view, which is sometimes not the case on Scottish moors where I was flying on peregrines). The IMU also had a tri-axial accelerometer, gyro and magnetometer. All the data was stored on a flash drive on the bird so I crossed my fingers each time I flew one that the bird would come back.
In 2018 I co-authored a monograph on Steller’s Sea Eagles, the world’s largest eagle, with two Russian colleagues, and was lucky enough to find a captive Steller’s in this country which I could fly the unit on. That was a seriously interesting time. Steller’s are huge. I remember seeing them for the first time in the wild – in Kamchatka – which was awesome, but the size only became apparent when I saw them above sea ice over the Sea of Okhotsk when they flew with White-tailed Eagles. The White-tailed Eagles are the biggest raptors we see over here, but they were dwarfed by the Steller’s.

I also flew the unit on Merlins for the book published earlier this year. By then I was flying second generation units. These are much smaller, weighing only 3g, and much faster, tracking at 13Hz and collecting tri-axial data at up 1.6kHz. How much I can reduce the weight is important because every additional gram affects the bird in some way, and so particularly for Merlins getting the weight down is vital. Speed of data acquisition is also important because Hobbies, for instance, are incredibly agile and so the unit has to be fast to follow every twist and turn. Flying on a hunting Merlin was a strange experience. On the first flight we put the IMU on, released the bird and it flew 60m and attacked a Blackbird in a hedge. After a short fight the Blackbird escaped. For the rest of that day and several other days, the Merlin didn’t catch anything. 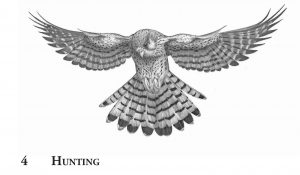 Why did you choose Kestrels as the subject for your latest book?

The UK is very lucky in the four falcons we have as breeding species. Peregrines are renowned for their high-speed stoops, Merlins for their fast chases and ringing flights, Hobbies for their agile flights after dragonflies and Kestrels for their ‘hovering’ search for mammals. A different hunting technique for each. I was particularly interested in Kestrels as in hovering – the official term for the technique is now ‘flight-hunting’ – the head must be held stationary for successful hunting so the body has to absorb the phenomenal forces caused by gravity, beating wings and the drag of gusting wind. I was anxious to investigate how they did it. 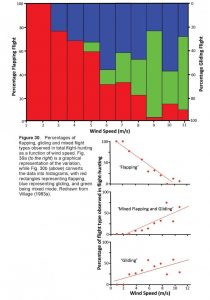 Did you encounter any challenges collecting data for your new book: Kestrel?

It required a lot of very sensitive equipment and some skilled operators. We borrowed two hi-speed cameras insured for £250,000 and set them up head-on and side-on to a flight-hunting falconry male Kestrel which carried the IMU. The cameras were running at 800fps and were filming 4k images, vast amounts of data were being collected and stored. The unit on the bird was collecting tri-axial data at 800Hz. It was also collecting satellite timing data, so to align wing, eye and head position we had to have a special time code generator which took a signal from the same satellites and stamped each frame of the film with a time measured in microseconds. The results are impressive in terms of how stable the head and eye position are. We are now preparing a paper for the scientific literature of body orientation relative to head position. It would have been good to have had that in the book as well, but the maths is so complex it is hard to make it easily accessible.

Your book features a four-year study to observe breeding behaviour; can you tell us anything about the methods and findings? 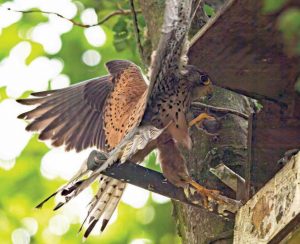 For four successive years we set up an array of video cameras filming breeding Kestrels in a barn in Hampshire. We had one camera filming the comings and goings of the adults and, later the fledglings, and two cameras in the nest box watching egg laying, incubation, hatching and chick growth. We filmed 24 hours every day, turning on IR lights to film at night. We measured egg laying intervals to the nearest minute, found accurate hatch times and watched every prey delivery. We also set up live traps where we knew the male hunted so we could weigh the local voles and mice and estimate how many kgs of rodent it takes to make 1kg of Kestrel. The filming was interesting – over the years the adults brought in slow worms, lizards, frogs and moths, as well as voles, mice and shrews. One male also brought in a weasel. This has long been suspected, but never-before filmed.

Can you tell us about any projects you are currently working on?

Because of COVID there is less money about, and writing books also takes lots of time and hard work. I have already decided I will not do a Peregrine book as there are already enough on the market (though none of them cover flight dynamics the way I would). I had planned to do a Hobby book because their flight is so fascinating, but if 2021 is another COVID year l might not be able to.

Investigates all aspects of the Kestrels’ life, from plumage and diet through breeding to survival: also includes a four-year study in which video cameras capture breeding behaviour. Further studies also investigated the flight  using the modern technology of inertial measurement units allied to excellent photography.

You can browse all titles by Richard Sale here