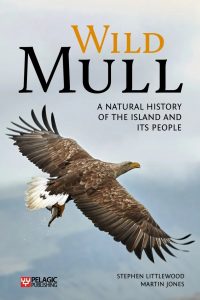 Wild Mull: A Natural History of the Island and its People guides the reader through the world of the Isle of Mull in its glory, considering every facet of the island’s natural history, diverse species and stories of past, present and future.

Mull is a seaborne landscape off the west coast of Scotland, displaying uncommon biodiversity and full of rare wildlife experiences, but today it faces some of its greatest challenges. With superb illustrations and illuminating text, Wild Mull is testimony to the power of wild places and the duty we have to protect and learn from them.

Stephen Littlewood kindly agreed to answer some of our questions below.

Could you tell us what inspired you to write this natural history of the Isle of Mull and its people?

We live in an era when wildlife is being pushed more and more into the
margins, and many people are starved of the experience and understanding
of wild places. In this context, there is a consensus that Mull is formidably
equipped to display a concentration of land and marine species that is very rare today. It is also a relatively accessible destination. Consequently, the island and its surroundings have become significant attractions for a burgeoning population of wildlife tourists and, it must be said, for the tourism industry which has prospered on the back of a fascination with the so-called ‘wild’. Today, Mull’s reputation for delivering outstanding and intimate associations with many iconic British species draws people from far and wide. However, until now there has been no single resource that explains how Mull came to this position, or what it is about its aggregation of species and habitats that makes it so outstanding. I felt that it was high time to rectify that, but in doing so it was important to address some of the questions that are often overlooked during the pursuit of the profound pleasure to be gained from embracing nature in cherished land and seascapes. The book was always intended to be as much a history, an explanation and an exploration of this special place, as it was a guide to its species and habitats.

Visitors typically arrive on Mull with a wish-list of species to see. That list is
invariably topped by eagles (white-tailed and golden), otters, puffins, and
cetaceans. What people tend to be less appreciative of, or often not at all
interested in, is the backstory both to these species and of the multitude of
supporting flora and fauna. All of them are equally beautiful and extraordinary in different ways, and it is the sum of their parts that enables the headline species to thrive. I wanted to encourage the reader to explore as much of Mull’s complex biodiversity as possible, whilst also explaining how, in such an apparently injury-free landscape, it is constantly under pressure and subject to continual interventions by people, in the same way as anywhere else. To do so the book had to be factual but at the same time attractive and not overbearing. This meant that it would have to deliver a visual thrill; to make all of it, even the smallest elements, tangible and exciting. I also knew that Martin could sprinkle that magic, embroider the broad design concept, and embellish the text with the kind of high-quality photo images that would prove irresistible to the potential readership. He has done this wonderfully well.

You mention that human intervention has had a profound effect on Mull.
Could you tell us a little more about the historical relationship between
humans and the environment on the island?

Mull’s environment isn’t perfect, or unblemished. Most of that is down to
the fact that people have been surviving on, profiting from, and ‘improving’
it for 10,000 years. If we were going to tell an honest story of the island’s
natural history, it had to include the role of people, for better or worse, in
shaping it. To begin with, I thought that this would be a tale largely of land
use, of subsistence arable farming, grazing by domestic animals, wholesale
planting and harvesting of cash-crop conifer plantations and so on. Of
course, these are significant elements in the story, but only when I started to examine the historical record did I realise the extent to which species have been manipulated, consciously and unconsciously, by human interventions that have fundamentally impacted the flora and fauna over time. The picture of what we think of as a natural biodiversity, not only on Mull, isn’t necessarily as we perceive it. An extraordinary proportion of our flora and fauna has been introduced, exterminated, or tampered with. What I find interesting is that each time these actions have occurred they have been judged by the social, moral or economic expediency of the age. Today, we may feel confident that we know the right and wrong ways of addressing biodiversity issues, but one wonders if future generations will have a different perspective again.

The pine marten is flourishing on Mull, which is considered by some
to be a success story, given their critical status in England and Wales.
However, you highlight their potential negative impact on many of Mull’s
endangered bird species. How does Mull plan to tackle this conservation
conundrum?

In short, Mull doesn’t plan to tackle it at all nor, I think, is it a topic that is widely discussed. The pine marten is a very recent arrival on the island, and although it was not ‘formally’ introduced, it is generally accepted that it is here to stay. Its presence is mostly felt by the inhabitants to be desirable, so hopefully, its impact upon other species will not be to drive them beyond sustainable populations. Its role as a new predator does raise interesting questions, however. It is certainly thriving, but nobody is monitoring the impact of its reintroduction, nor the size of its population. It is a protected species in Scotland, so, therefore, cannot be deliberately trapped, whilst at the same time, the Scottish Environment Protection Agency (SEPA) have said that, because its introduction was never officially sanctioned, if it is accidentally caught in mink traps, for example, it should be removed from the island as an illegal immigrant and liberated elsewhere. We don’t really know if its migration is good or bad for Mull’s wildlife, and we don’t have any inclination to find out. I find this a confused response and a fascinating conundrum in the light of current approaches to the restoration of our damaged environments.

Tourism, particularly ecotourism, contributes a large proportion of the
island’s economy. However, negative aspects of ecotourism, such as
overuse of areas, can lead to environmental damage. What measures are
being taken to keep tourism sustainable?

Ecotourism is probably now the largest contributor to the economy of Mull,
but again this isn’t a question that is really generating much deliberation
about the future or consideration of potential interventions. There are parking issues, particularly in the centre of Tobermory, which have
been the subject of debate and are likely to result in the community and local authority trialling solutions to excess traffic in urban areas. However, in terms of ameliorating traffic growth on the roads, the impact of ‘wild’ camping, or the increasing pressures on species such as puffins and otters by wildlife photographers and so on, there is little formal debate and very little coming forward by way of attempts to make tourism more sustainable to protect the environment. It was interesting, whilst writing the book, to reflect upon the significant behavioural responses of wildlife during the Covid-19 lockdowns. There were many discernible changes, both as a response to restrictions upon tourism and the subsequent lifting of those restrictions.

Do you have any future projects planned that you can tell us about?

Mull could be likened to an accessible ‘mini laboratory’ with the potential to
explore many environmental issues which are being played out on a much
bigger stage. I would like to use the prism of Mull to address some of the
big questions that arose in writing the book, although unpacking and making sense of the many wicked issues that come to mind is a complex and hazard-strewn path which would be a wholly different kind of journey. In the meantime, perhaps Martin and I will further develop some of the core themes of this book, which continue to fascinate and engage an ever-increasing number of interested individuals.