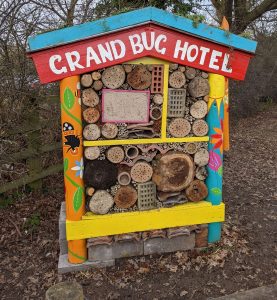 Greeted by the trumpeting of elephants across the otherwise silent car park, we arrived at Chester Zoo. With a quick glimpse into the rhino enclosure, we turned away from the main entrance and headed towards the lecture theatre (passing an impressive and colourful bug hotel) for the start of the BIAZA conference. The theme for this event was to be rewilding – an extremely topical and exciting subject in the current world of conservation.

It seemed fitting that the event began with a talk by the highly esteemed conservationist Professor Alastair Driver, who is also the director of Rewilding Britain. It was amazing to hear how much popularity the concept of rewilding has gained, with many landowners now approaching Rewilding Britain, searching for advice on how best to rewild their own land. Dr Daniel Hayhow, the main author of the State of Nature report published in October 2019, followed with a discussion of the key findings of this pivotal report to paint a picture of how nature is faring in the UK. Jo Kennedy with the Manchester Mossland project brought the first session of the day to an end, demonstrating how collaborations such as the one that exists with themselves and Chester Zoo have been a vital aspect of captive bred reintroduction projects. The successful reintroduction of the Large Heath butterfly to the Manchester Mosslands Special Area of Conservation is a great example of this.

As the attendees patiently queued for their cups of tea and bourbon biscuits, we stationed ourselves in the adjoining room by the NHBS stand. We had brought with us various pieces of kit that are used for species surveys and monitoring, an important aspect of assessing the success of rewilding projects. Our selection of trail cameras were a popular talking point in particular, attracting interest from keen naturalists eager to investigate the wildlife in their back garden, to professional researchers and conservationists in charge of species reintroductions.

In the same room you could also marvel at the amazing models on the Manchester Mossland project display that show the species that they are working with at their sites. Or perhaps explore the insect collection brought by the Tanyptera Project, who seek to promote the study of invertebrates in Lancashire, Merseyside, Cheshire and Great Manchester. There was also a raffle where a lucky winner had the opportunity to win a NHBS voucher or a British Wildlife gift subscription!

The next session featured a rather lively talk from Philip Turvil of Kew Gardens, who told us how 4 million people have been engaged by the Grow Wild mission, and certainly entertained all of us with a ‘Wildflower rap’ video (not performed by Philip I hasten to add!). BIAZA also used this opportunity to launch ‘Grab that Gap’, an initiative to encourage BIAZA members to transform a section of their site (the edge of a car park for example) into a wildlife haven and calls for participants to use social media to share their story #GrabthatGap2020.

After lunch we were all taken outside to explore Chester Zoo’s very own nature reserve. We were taken through the history of the reserve, the types of species to be found (14 species of dragonfly at the last count, and over 20 butterfly species) and management techniques in place. It struck us how much vandalism occurs at the site; many Malaise traps had been destroyed and there was evidence of graffiti. But the staff at Chester Zoo are extremely dedicated and have big visions for the future.

We were also given an opportunity to pitch in and help. Dead hedges are used not only to stop the little ones from running down the hill and straight into the pond, but also to provide a habitat for invertebrates and birds as the hedge starts to rot down. Our job was to top up these hedges with new branches (and to not slip down the muddy hill of course).

Then back to the warmth with an interesting line up of talks to finish the day. This session had a species reintroduction theme covering mammals, birds and insects, starting with the reintroduction of Pine Martens to the Forest of Dean. It was fascinating to hear of all the measures involved to ensure that there is a genetically diverse reintroduced population, minimal stress to the animals and the prevention of the spread of disease. The focus was shifted to a rare invertebrate, the Pine Hoverfly Blera fallax – the adults of which have not been seen in the wild for seven years. Dr Helen Taylor from RZSS discussed the captive breeding programme put in place to ensure there is a viable population for future reintroductions and the associated challenges with this approach.

Next we heard about the Red-billed Chough, the flagship species for the Birds On The Edge project, and their reintroduction to Jersey following a successful captive-breeding programme at Jersey Zoo. The session was drawn to a close with the final two talks of the day, the first of which reviewed the native bat species recorded at Knowsley Estate and their habitat use, followed by Will Mallard describing his PhD research project on the Barberry Carpet Moth.

The take home message? Rewilding is a step in the right direction to restore ecosystems and habitats to a state where nature can take care of itself. It isn’t just about wolves and bears.

With each day we were all generously given a free ticket to enter Chester Zoo, so of course we had to nip in before we left!