Birds and Climate Change: Impacts and Conservation Responses has just been published by Cambridge University Press. This key topic is given a broad critical review by James Pearce-Higgins, a Principal Ecologist at the British Trust for Ornithology, and Rhys E. Green, Principal Research Biologist at The Royal Society for the Protection of Birds and Honorary Professor of Conservation Science at the University of Cambridge. We asked them a few questions about the priorities and processes involved. 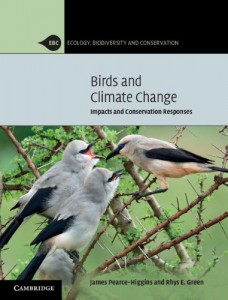 Given this is such a vast subject, is it possible to summarize what we know currently about the impacts of climate change on birds – and also how we know it?

There has been an increasing wealth of scientific information published in recent decades, documenting the impacts that climate change has had on birds, which we review in the first part of the book. One of the best documented impacts is that the timing of spring migration and breeding outside of the tropics has become earlier in response to warming. There is also strong evidence that the abundance within bird populations has changed in response to changes in climatic variables through time. This has occurred through a range of different mechanisms. In response to climate change, these processes have led to significant changes in the composition of bird communities through time, and to shifts in species’ distributions, which have tended to move poleward by an average of over 7 km per decade.

The precise impacts of climate change vary across the globe, with changes in temperature being much more important in temperate and higher latitudes, whilst variation in rainfall is the most important cause of change in the tropics, and to long-distance migrants. Although there is a burgeoning evidence base about climate change impacts on birds, much of this research is from Europe and North America. We show in a key graph how little research effort there has been in the tropics, where we have shown the ecological processes are different, and where the majority of bird species are found. Long-term monitoring of bird populations, breeding and migration are an important resource for climate change studies. These studies have been done both by volunteer enthusiasts and academics, but mostly in the Northern Hemisphere and outside the tropics. Addressing this monitoring and research gap should be a high priority.

Much of the long-term monitoring data required to study the impacts of climate change upon birds is necessarily collected by volunteers (citizen scientists) because this ensures that the data are sufficiently extensive and sustainable in the long-term. Thus, information about the changes in the timing of migration and breeding is collected through bird observatories and schemes like the BTO’s nest record scheme, whilst large-scale information about bird populations and distributions is collected by standardised monitoring by volunteer birdwatchers, such as through annual breeding bird surveys and periodic atlases. Ringing (banding) and nest record schemes provide information about birth and death rates, which can help identify the processes behind these changes. These data are complemented by professional studies which are often more intensive and particularly have helped to understand the ecological mechanisms of change.

What sort of conservation responses are available?

Maintaining and extending the existing protected area network, alongside initiatives to improve the management of sites in that network, will be vital in helping species adapt to climate change. For example, protected areas can provide opportunities for colonisation of areas where the climate has become suitable for a species because of climate change. However, we recognize that with increasing magnitude of climate change, this adaptation challenge will become more difficult, and require more radical solutions. The final chapter in this section also considers the additional complication that the ways in which greenhouse gas emissions are reduced, and other climate change mitigation, will also have a significant impact on bird conservation. Some renewable energy options are likely to have negative impacts on birds, whereas prevention of the release of carbon stored in forests and bogs because of inappropriate land use change, such as deforestation and drainage, is likely to be beneficial for the bird species which inhabit those habitats.

Can you give some specific examples of responses underway, and what sort of levels of success these are demonstrating?

There has been recent criticism that because climate change will result in shifts in where species are found, that a static network of protected areas will no longer be useful. However, a number of recent studies are reviewed which demonstrate that by protecting large areas of extensive semi-natural habitat, protected areas in fact ensure the existence of suitable areas of habitat for species to move into. This has been particularly demonstrated for wetland and heathland nature reserves in the UK. There has also been much discussion about the potential for the creation of stepping stones and corridors to help create more connected landscapes through which species may move more easily. This literature is also discussed, which demonstrates that these interventions may benefit 30% of bird species studied, or fewer. Indeed, for the most sensitive habitat-specialists, such as tropical forest specialists, about 50% of a landscape may need to remain forested to ensure connectivity. Evidence is also building for the potential to manage sites appropriately to increase their resilience to climate change. In particular, the blocking of drainage ditches in the UK uplands may raise water levels and reduce the vulnerability of peatland ecosystems to summer drought, which will benefit a range of upland bird species, such as the golden plover.

Global change demands global responsiveness – how much agreement is there over the priorities?

Priority setting will be an important aspect of conservation responses to climate change, and a range of different ways in which priorities may be assessed exist. We review a number of these in the book, as well as suggesting a number of ecological traits likely to be associated with species vulnerability to climate change. Whilst there are an increasing number of examples of these being applied to particular regions or countries, there remains a lack of consensus over priorities across continents or biogeographical areas. The need to address this is recognized, and as discussed in the chapter on conservation in a changing climate, there is potential to use existing policy instruments, such as intergovernmental agreements, to achieve this. Given the potential threat that human responses to climate change may also pose to birds, whether the impacts of renewable energy generation, or other potential changes in land-use and other sectors discussed briefly in the final chapter of the book, this consensus needs to extend to other areas in order to be effective.

What future developments are on the horizon in extinction risk assessment, and are you positive about the potential impact of conservation responses overall?

One of the most significant chapters in the book reviews the literature predicting the effects of climate change on birds, and provides guidance for how this should be used. There is considerable potential to extend these to include information about population size, rather than just occurrence, and to make them more process-based, incorporating information about demographic rates and the mechanisms by which climate change may affect the species of interest. This has been achieved in a small number of cases, producing models which may be useful to inform future decision making about conservation responses to climate change. Such development will be particularly valuable, because it will help to assess the likely potential impact of conservation responses, relative to the likely magnitude of future climate change. However, this detail comes at a cost, and will not be feasible for most, or even many species.