Book Review – How to Tame a Fox (and Build a Dog) 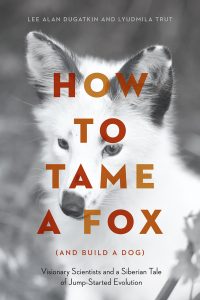 How to Tame a Fox (and Build a Dog): Visionary Scientists and a Siberian Tale of Jump-Started Evolution

How to Tame a Fox (and Build a Dog) tells a remarkable story about a remarkable long-term experiment you will most likely never have heard of. I hadn’t, despite my background in evolutionary biology. When the announcement for it crossed my desk a month or so ago, its subtitle immediately grabbed my attention.

For more than 60 years, Russian scientists have been cross-breeding captive foxes in Siberia, selecting for tameness, in a bid to learn more about the evolutionary history of animal domestication. Written by evolutionary biologist and science historian Lee Alan Dugatkin and Lyudmila Trut, who has been part of this experiment for close to six decades, it tells the story from its inception.

Back in 1952, geneticist Dmitri Belyaev had many questions regarding domestication. Though the breeding techniques were well understood, how did domestication start? The wild ancestors of today’s domestic animals would have likely run away or attacked humans, so what changed to make domestication possible? Being the lead scientist at a state laboratory that helped fur breeders produce more beautiful and luxurious fox pelts, he had both the knowledge and the means to tackle these questions. His plan? Experimentally mimic the evolution of the wolf into the dog using its close genetic cousin the fox. It was bold, both in its timescale, likely needing years – even decades – to yield results, but also in its timing. You see, Russia was still under the communist rule of Stalin, and one of his protegees, the poorly educated agronomist Trofim Lysenko, was waging a war on the “western” science of genetics. Scientists were expelled, imprisoned, and even murdered over their career choice. But Belyaev, having lost a brother this way, refused to back down. Far from Lysenko’s prying eyes in Moscow, in the frozen wilderness of Siberia, he started his breeding experiments, purporting to improve breeding rates in case anyone did come asking. Lyudmila joined him in 1958, and this book is their story.

It’s a story of science, and the authors do a good job distilling the findings into a reader-friendly format. The results are fascinating as the foxes rapidly evolve from wild animals to tamer and tamer companions that crave human interaction, undergoing a raft of subtle morphological changes in the process. But it’s also very much a human story. Of the women, often local peasants, who came to work at the fox farm, not necessarily understanding the science, but showing immense dedication to the cause. Of the researchers, who developed a deep love for, and connection with the generations of foxes, who rapidly became more dog-like in their behaviour and appearances.

It’s a story of persistence against all odds; the experiments are running to this day and have survived Stalin’s brutal regime, the Cold War, and the dissolution of the Soviet Union, with all the economic turmoil that that caused. And it’s a story of an opportunity most scientists can only dream of: being able to follow up on previous findings and answering questions raised by previous experiments. Uniquely, this played out during (or perhaps was able to keep going because of) a period in which our knowledge of genetics, and the technologies available, kept on developing. The measuring of neurochemicals, epigenetics, PCR, genome mapping, next-generation sequencing… as new questions were being generated, so new techniques became available to probe deeper into the mysteries of the domestication.

The book makes for fascinating reading and is hard to put down once you start it. Highly recommended.

How to Tame a Fox (and Build a Dog) is available to order from NHBS.