Brock Fenton on the mystery and science of bats 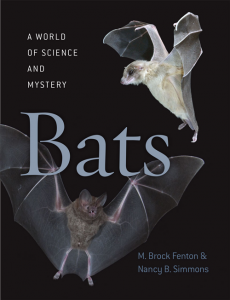 Brock Fenton is Professor Emeritus in the Department of Biology, Western University, Ontario, Canada. His research programme involves using bats to explore the interfaces between animal behaviour, ecology and evolution. As co-author of the exciting new book, Bats: A World of Science and Mystery, we thought it would be interesting to pose him a few bat-related questions:

How did you become involved with bat research as a career?

As an undergraduate student I was attracted to bats by the abundance of things to learn about them. Part of this I experienced by looking in caves for hibernating bats that had been banded elsewhere. The other part was the library, books about bats (Bats by G.M. Allen; Nerve Cells and Insect Behaviour by Kenneth D. Roeder) and articles in journals. My main research focus now is on bat evolution, behaviour and echolocation.

In evolutionary terms, what is a bat, and how have they come to represent around 20% of all mammal species?

Bats are mammals capable of powered flight. Flight gives them mobility and their small size makes them inconspicuous. Bats fill a variety of trophic roles as consumers of insects, plant products, as well as other animals (from fish to other bats and birds), and even blood. I suspect that a combination of mobility, small size and flexibility is responsible for their evolutionary success. The blood-feeding vampire bats are among the best examples of this success.

Is it possible to define the character of a bat, and a typical day in the life?

I had not thought of “character”. Bats are mainly nocturnal, so operation at night is a key characteristic. They are long-lived (some species over 30 years in the wild), and high energy, requiring large quantities of food to fuel their activities. Although bats typically emerge (from their daytime roosts or hiding places) at dusk, they probably come and go from their roosts during the night. In the northern hemisphere and some other temperate parts of the world, bats use delayed fertilization to ensure that young are born when food is abundant.

The title of the book includes the word ‘mystery’ – what do we remain in the dark about regarding these nocturnal creatures?

There are about 1260 species of living bats. The largest weigh about 1500 grams, but most species are under 50 grams.  Bats survive because they are hard to find by day. The combination of secretive and small size makes most species of bats hard to study. This means that people who study bats regularly make astonishing discoveries about them. In spite of some concerns about the possible role of bats in public health, most species have no direct impact on humans. Lack of direct connection to humans means that bats are sidelined when it comes to some main stream areas of interest, particularly those relating to human health.

What are the world conservation priorities for bats at the moment, and can you highlight any projects that are doing interesting work?

Bats are “typical” wildlife, mainly negatively effected by the habitat consequences of expanding human populations and demand for resources. In Northeastern North America, White-nosed Syndrome has killed literally millions of bats. Around the world turbines at “wind farms” also kill bats, but not on the scale of WNS. Research into White-nosed Syndrome and bats’ responses to turbines are important for the future of bats. Other research into the role that bats may play as reservoirs for diseases also is important for the image of bats. The last part of the book speaks about some of the unanswered questions about bats that appeal to the authors.

Who is this book aimed at?

We hope that this book will appeal to anyone interested in biodiversity and natural history. This could be the person interested in evolution or echolocation, conservation or social behaviour. We also hope that it appeals to those intrigued by flight, by where bats live and what they eat. It is not intended to be a text book about bats.

Bats: A World of Science and Mystery is published in November 2014