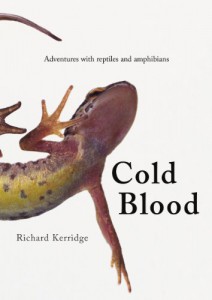 Tell us about where you grew up and what inspired your early adventures with reptiles and amphibians.

I grew up in the south London suburbs, and some of my earliest memories involve images of animals – on television, in books and on the little picture cards I collected from tea packets. The wild animals of Africa and India fascinated me. I loved natural history books and stories about expeditions to find tigers and elephants. One of my fantasies was that I had a pet tiger, a huge male who would leap out and scare away boys who were trying to bully me. In my daydreams, as I walked home from school, the tiger would pad along beside me, out of sight behind the hedges.

But what could I actually encounter? Did England have any exciting animals to match the elephants and tigers? I read about otters, badgers and hawks, but they were far from my suburban experience, with its garden ponds and overgrown corners and strips. Foxes were elusive twilight animals. Reptiles and amphibians, however, were dramatic wild animals that could be found near my home. If I scaled down, the tangles of pondweed and banks of gorse and heather became forest and savannah, and the newts and lizards formidable megafauna. The theatricality of suddenly seeing one of these animals was important – the thrill, the intensity, of trying to edge closer without scaring away what at that moment always seemed to be the most vivid lizard yet, or the deepest-black newt. For me the animals represented the wildness that I felt was all around me, all around London, and all around Britain. They were emissaries from all the lakes, heaths, streams, scrubland, grassland and forest of the world.

Do you still have a bath tub full of lizards, frogs and snakes in your back garden?

For decades I didn’t keep any, after coming to feel in late adolescence that our hobby had been cruel and clumsy. By this time I was preoccupied with literature and politics, and teenage social and sexual life. And then I went to university to study literature, and was moving house every year. Throughout all this, the reptiles and amphibians still lived in brackeny parts of my mind, and I was always glad to see a real one.

After the contract had been secured for the book, I made an exception, and acquired some captive-bred hatchling European Green Lizards, which I keep in the garden, not in a bath but a large vivarium made of special Perspex that does not block UV light. The impulse to get them was part of the spirit of starting the book. And I do love having them. I always liked this species, which used to be sold commonly in British pet shops and lives wild on mainland Britain in one feral colony. They are an extraordinary powdery green. The young ones I have are beginning to come into adult colours.

How did your investigations develop? Since 1996 you have been Course Director of the MA in Creative Writing at Bath Spa University – were you ever tempted to go into biology as a career?

I couldn’t have. At fourteen, when I had to choose my O-Level subjects, it was either Biology or History. You couldn’t do both, and History and English were my best subjects. I wasn’t good at sciences, and in those days people were mostly identified at about that age as either artists or scientists. If you were good at one, you didn’t have to worry about the other – that was the message.

My strongest interest, anyway, is in the emotional significance that wild nature has in people’s lives. Our conventional ways of talking and writing about natural history have in recent decades been rather shy of sophisticated emotional language. A split between scientific and artistic ways of thinking has occurred in popular natural history too, since the middle of the twentieth century. The ‘new nature writing’ is attempting, among other things, to bridge that gap, and to explore the ways in which the love of wild nature relates to other life experiences and to shared culture.

For those less keen on the reptile and amphibian fauna, could you share some fascinating facts that might break the ice?

The horror and fear that these animals arouse, snakes especially, is part of their glamour. They provoke strong reactions and feature regularly in thrillers when some sort of eerie spine-tingling villain is required. The fear is fascination. But, to break the ice, I would ask people to see the beauty of each animal’s relationship to its environment – the exquisite way in which a snake or lizard acquires and concentrates the subtle colours of heather, sand and bracken, and receives on its tongue the changing chemical information in the air. They are spirits of their places.

What prompted you to write the book, and do you think nature writing has a place in reorientating people’s attitudes towards wildlife, and the environmental and ecological concerns of our time?

The book has been inside me since childhood. At last – with support from my agent and editor, and inspired by seeing many students do it – I found the confidence to let the writing come. Nature writing has a part to play, I hope. There is a surge of this kind of writing in Britain at present. We are in what has been called ‘the nature writing moment’, and I don’t think the timing is accidental. It seems likely to me that people’s renewed interest in this genre comes from unease about environmental problems and the failure of our political system to respond to them – climate change most obviously, but other disturbing trends also, such as collapsing bird and fish populations and the prospect of a new industrialization of farming. People who read these books may be looking to find out what is happening to wild nature now, and what sort of meaning it can have in our lives. What happened over the proposed sell-off of public forests a couple of years ago was another sign. Politicians had forgotten that people cared about such things. Nature writing is no longer escapist, if that was ever a fair accusation. It is a genre that confronts some of our most important and contemporary challenges.

What advice would you share with amateur naturalists keen to explore the cold blooded inhabitants of their local patch?

Have a look at the Reptiles and Amphibians of the UK website and the Amphibian and Reptile Conservation Trust website. Make an online search pairing the name of your region with the name of the species you want to see. Or go out to any wetland or heathery heath near your home. For reptiles, choose a sunny day before 10.00 am or after 4.00 pm. Approach banks and verges quietly, watching for movements. When you get your eye in, you see animals you would not previously have noticed. Look under logs and pieces of wood, and especially flat pieces of metal. Slow worms often hide there, and sometimes snakes and toads. Shine a torch into ponds after dark. Expect surprises.