From a close look at two very different restoration projects in Yorkshire to the eradication of Japanese knotweed without the use of herbicides, the Autumn issue of Conservation Land Management (CLM) covers a variety of topics and themes relevant to those involved in managing land for nature. Below is a summary of the articles featured in this latest issue. 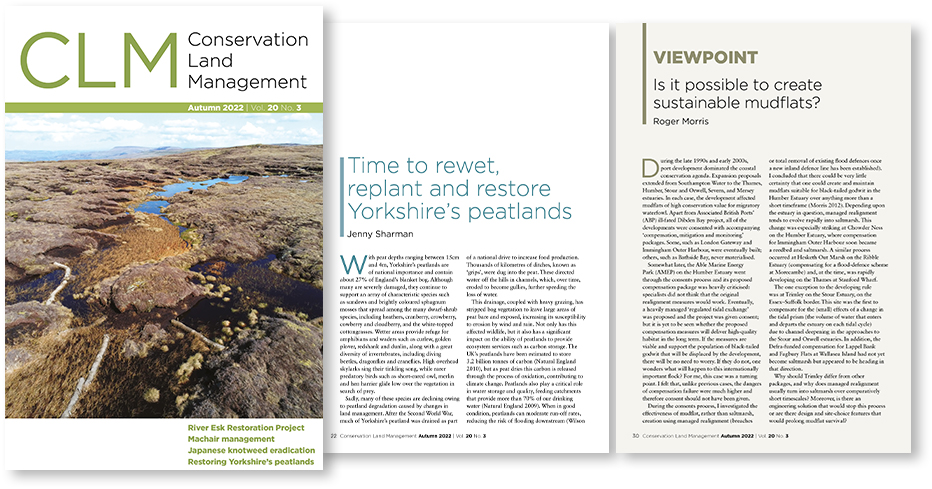 The first of the Yorkshire-based articles, authored by Sarah Lonsdale of the North York Moors National Park Authority (NYMNPA), describes the River Esk Restoration Project. The River Esk flows through the North York Moors and is the only river in Yorkshire to support populations of the rare freshwater pearl mussel. Agricultural pollution and sedimentation threaten the mussel’s habitat and the Esk’s water quality, however, and the Esk Restoration Project aims to address these pressures through habitat creation and restoration, farm infrastructure grants and targeted one-to-one farm advice. Sarah describes how, through this project, the NYMNPA has worked with farmers and landowners to reduce agricultural pollution via riparian habitat creation and improvements in on-farm infrastructure. This has involved, for example, the installation of in-field solar-powered water troughs to reduce riverbank erosion caused by livestock trampling and the creation of wide habitat buffers to help reduce the amount of pollutants reaching the river – Sarah describes these and other approaches in more detail, and discusses the future of the project.

The second article set in Yorkshire is focused on peatlands. Yorkshire’s peatlands contain 27% of England’s blanket bog and support an abundance of wildlife, but changes in land management, for example through drainage and heavy grazing, have led to their degradation. In this article Jenny Sharman describes the impressive work undertaken by the Yorkshire Peatland Partnership to reverse this trend and restore and rewet Yorkshire’s peatlands. Signs of recovery have quickly become apparent, and Jenny guides us through the process of peatland restoration, which begins with initial surveys to assess the extent of the damage using satellite imagery in preparation for work on the ground where a myriad of approaches are used, from using diggers to revegetate exposed peat to installing timber sediment traps and coir logs to help slow the flow of water and retain sediment.

Looking now to a different habitat, Robin Pakeman discusses the management of machair, an extremely rare coastal habitat only found in western Ireland and western and northern Scotland. It develops on shell sand in exposed coastal areas, and refers to the plain behind sand dunes. Human use of machair has a long history, and traditional management combined with specific environmental conditions has produced this wonderfully unique habitat, famous for its spectacular floral displays and bird and insect communities. Crofting, a form of land tenure that only occurs in north and west Scotland, has had a strong influence on Scotland’s machair, and in this article Robin explores the management of both arable and grassland machair, and describes the diversity of wildlife associated with this habitat.

The infamous Japanese knotweed is a problematic non-native invasive species in the UK, and the general consensus regarding its control suggests that the use of glyphosate-based herbicides is required. Aston’s Eyot nature reserve, in east Oxford, was previously a rubbish dump, and since it was badly capped in the late 1940s Japanese knotweed established itself there, suppressing the growth of many other plants that would otherwise thrive. To combat this issue, the Friends of Aston’s Eyot, a group formed in 2010 to care for the nature reserve, decided to trial different approaches to management of knotweed. The trial area was divided into three; two of these were to be treated with glyphosate. In the third area knotweed was to be cut and its emerging shoots would be pulled out by hand. Claire Malone-Lee took responsibility for this third area, and in this article reflects on eleven years of manual control and demonstrates that it is possible, particularly on small sites or where knotweed is not overly dominant, to successfully eradicate Japanese knotweed without the use of herbicides.

When the Able Marine Energy Park project on the Humber Estuary was given the go-ahead, Roger Morris was concerned for the internationally important flock of black-tailed godwits that resided there, and the mudflats that they depended on. The final article in this issue, a viewpoint piece by Roger, asks if it is possible to create sustainable mudflats as a mitigation measure, and explains why it is difficult to stop or slow the process of mudflat becoming saltmarsh. He describes the processes behind saltmarsh and mudflat development, and addresses the different approaches that have and can be used for mudflat creation.

In this and every issue you can expect to see Briefing, keeping you up to date with the latest training courses, events and publications, and On the ground which provides helpful tips or updates on products relevant to land management. Other features, such as Review, which can include letters from readers or updates from our authors, also regularly appear in CLM.

CLM is published four times a year in March, June, September and December, and is available by subscription only, delivered straight to your door. Subscriptions start from £22 per year. If you would like to read any of these articles, back issues are also available to purchase individually (subject to availability).

If you are involved in a conservation project and think your experiences could be useful to other practitioners, we would love to hear from you. Feel free to contact us if you are interested in writing for CLM – we will be happy to discuss your ideas with you.