My Atlas of Breeding Birds in Devon has a pale blue cover, a black-and-white picture of a stonechat on the front, and a price tag of £1.50. It is more than 40 years old.

The atlas, based on fieldwork from five breeding seasons, spanning 1968 to 1972, was described, somewhat inevitably, as an ‘ornithological Domesday Book’, from which changes in the status of the county’s breeding birds could be measured.

So how does the data, published in 1974, measure up to the new Devon Bird Atlas, published this year?

Cuckoo and starling were recorded everywhere in the old atlas, yellowhammer everywhere except Lundy. All three are now missing from large parts of the county.

The skylark was abundant throughout Devon then. Today it is scarce or absent from large areas, mainly farmland.

The skylark’s modern strongholds are Dartmoor and Exmoor and the new atlas says: “If present trends continue… the glorious song-flight will become less and less familiar in intensively farmed areas.”

The plight of the lapwing is even more pronounced. In the old atlas it was a widely distributed breeding species, despite a decline that had been noted since the 1930s; the new atlas records lapwing breeding in only three places, two of them at the RSPB’s Exe estuary reserves, the other on the southern fringe of Dartmoor.

Grey partridge was recorded breeding almost everywhere in the old atlas; now it is confirmed in only two places.

Dr Humphrey Sitters edited the old atlas, and in the preface to the new one says more agri-environment schemes are needed, but will only be put into effect if people who know what is going on “present the data we have collected and batter the politicians and bureaucrats into submission.

“Therefore, ultimately, if we lose our breeding birds it is as much our fault as everyone else involved.”

Cetti’s warbler was not in the old atlas, the first British breeding record is from Kent in 1973 – it may now be present at all suitable sites in Devon.

There was little evidence great crested grebe bred in Devon in the late 1960s and early 1970s. Numbers have since expanded, although it is doubtful more than 15 pairs successfully bred between 2007 and 2013, the years when data for the new atlas was collected.

The old atlas does not map where peregrine was breeding. During the fieldwork years only one or two pairs managed to rear young and the bird’s future, then blighted by pesticides and egg collectors, was too uncertain to risk identifying nests.

Today it is recorded as ‘possible, probable or confirmed’ almost everywhere, although in small numbers. Persecution is still with us, however, and the new atlas again tries to mask the actual nesting sites.

The sorriest story is possibly the curlew’s. It was breeding in more than half of Devon in the old atlas, although in small numbers – curlew had still not recovered from the historically cold winter of 1962/63, a trait then shared by many other species. Now breeding pairs are down to single figures, and the new atlas says the “future of the curlew as a breeding species in Devon looks bleak”.

The great landscape historian and great Devonian W.G. Hoskins described a Blackdown Hills parish, in the east of the county, as “a country of deep, winding lanes running from one ancient farmstead to another, haunted by buzzards in the valleys and by curlews on the heaths above, and full of flowers”.

The buzzards are still there but will we again be able to hear the curlew?

The old atlas grew from the BTO/Irish Wildbird Conservancy Atlas Project 1968-72, the new Devon Bird Atlas from the BTO’s Bird Atlas project 2007-11, which resulted in Bird Atlas 2007-11: The Breeding and Wintering Birds of Britain and Ireland. A large number of other regional and county bird atlases are also available and NHBS has prepared a list showing upcoming titles. 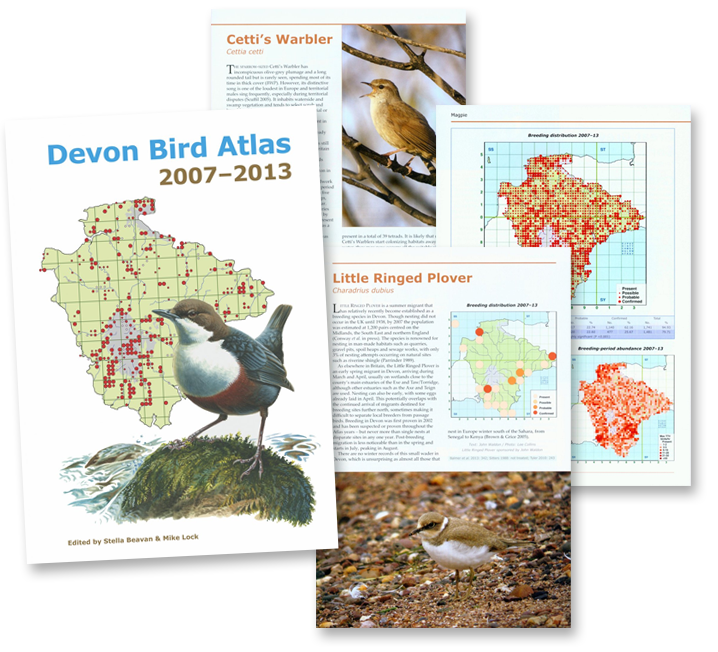