Bumblebees are familiar, much-loved animals in Britain. Together with ants and wasps, these winged insects are in the order Hymenoptera. The Latin name Bombus, meaning to buzz or boom, is wholly appropriate for bumblebees, who are frequently heard before they are seen.

Keeping an eye on brambles and purple flowering plants – both of which are particularly popular with bees – can be very productive when out on an insect hunt or daily stroll. At first glance, bumblebees may all look very similar, but take a closer look and a range of colours and stripe patterns can be spotted.

There are 24 species of bumblebee found in Britain. Seven of these are particularly widespread so are aptly named the ‘Big 7’ by the Bumblebee Conservation Trust.  Due to this prevalence, these seven species are a great place to start when learning to identify bees.

The colouration of the different species is the easiest way to identify bumblebees; particularly the colour of the tail and the number and colour of stripes. In our guide we have sorted the seven species by tail colour (or overall colour for the common carder) so that easily confused species can be directly compared.

Bumblebees with white or buff tails

Tail: As expected from the name, this bumblebee has a pure white tail.

Other: Males of this species can be identified by the presence of additional yellow hairs on their faces.

Tail: Named for the orangey beige, or “buff” tail of their queen. Males and workers of this species have white tails and so are very challenging to distinguish from the white-tailed bumblebee. In some males, a thin band of yellow/buff can be seen at the top of the tail, which is absent in the white-tailed species.

Tail: Bright white tail that tends to go further up the body than the lucorum species.

Banding: Has three stripes of yellow unlike the other species with white tails. Although, this can sometimes appear as one band around the “collar” and another wider one around the “waist”/midriff.

Other: The garden bumblebee has an incredibly long tongue, the longest of any of our species in the UK. At up to 2cm, its tongue is the same length as its entire body. This impressive adaptation allows these bees to reach the nectar in deep flowers such as foxgloves.

Banding: The tree bumblebee has an entirely ginger-brown thorax, with a black abdomen. This colouration makes it the most distinct of the pale tailed bumblebee species.

Other: Unlike the other six species, these bees like to nest in trees and are commonly found in bird nest boxes. The tree bumblebee is a fairly new addition to the UK, with the first individuals recorded in 2001.

Tail: Very bright red or dark orange tail that is difficult to miss.

Banding: Unique in that the females have no banding, they are just jet black other than the tail. The smaller males, however, have two slim yellow bands and yellow facial hairs.

Tail: Has an orange-red tail. However it is generally smaller and less bright than in the lapidarius species.

Banding: The early bumblebee has two yellow stripes on males and females.

Other: Smaller and fluffier in appearance than the lapidarius species.

The common carder is similar in colour to the tree bumblebee – orangey brown. However, with this species the colour continues across its entire body and tail. Some individuals have darker bands across their abdomens, especially later in the season as the orange begins to fade

Other: There are two other species of carder bee in the UK that are orange all over, however, the common carder is the most often seen across Britain.

If this guide has piqued your curiosity in bumblebees we recommend the following products so that you too can get outside, identifying species and learning more about these important pollinators… 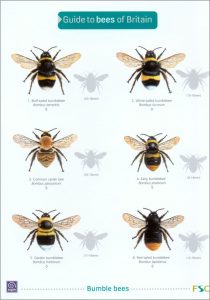 This lightweight fold-out guide shows a variety of bee species, including the ones mentioned above and will provide a useful reminder of their identification features when out in the field. Also includes additional information such as UK distribution. 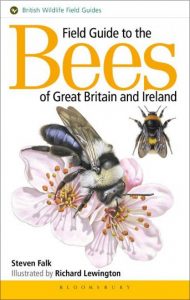 Field Guide to the Bees of Great Britain and Ireland
#245313

The ultimate guide – this book provides a comprehensive introduction to the ecology of bees and details of all 275 species found in Great Britain and Ireland. This Bumblebee Conservation Trust book fills that gap by introducing these charismatic species to a wider audience. Written by Trust staff, it covers bumblebee biology and also has an essential identification guide to all UK bumblebee species, packed with over 250 colour photographs 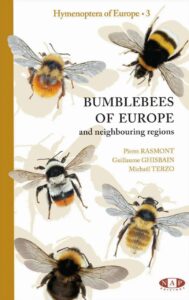 Bumblebees of Europe and Neighbouring Regions
#255136

This guide is the third volume in a series on Hymenoptera of Europe. After a short introduction to this order of insects, the book provides a wealth of information on the bumblebees of Europe, northern Africa, the Caucasus and the Middle East, covering the most recent scientific advances.

A hand lens is an essential part of your naturalist kit. We offer many different magnifications and options to suit all budgets. 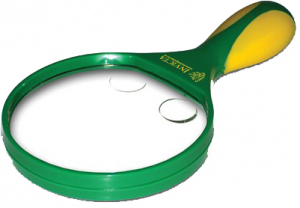 The size of this magnifier and its non-slip plastic handle makes it particularly suitable for use by families and children.