Handbook of the Mammals of the World, an interview with the series creators 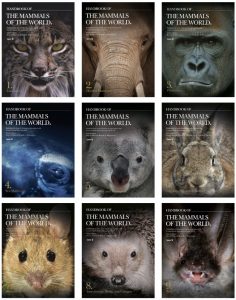 The final volume in the Handbook of the Mammals of the World series will be published in October 2019.

The first volume was published over a decade ago and Volume 9: Bats completes this hugely important reference series to the mammals of the world.

We asked publishers Josep del Hoyo and Albert Martinez to share their thoughts about the conception, production and fruition of this and the earlier Handbook of the Birds of the World series. 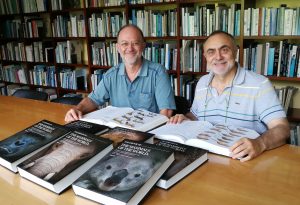 1. What inspired you to embark on the Handbook of the Mammals of the World series?
JOSEP: Well, in this case, our inspiration was very clearly the series’ predecessor: the Handbook of the Birds of the World (HBW). When we started on the Handbook of the Mammals of the World (HMW), we had already published 12 volumes of HBW and the results were encouraging, both in terms of enthusiastic reviews and commercial success. So, we thought it would be worthwhile to try to produce a sort of “sister series” covering all the mammals of the world. We saw it as natural that there should be a Handbook to properly treat all the animals forming part of the same Class to which we, as humans, belong. We were aware that while the number of professionals dedicated to mammals were high, that the number of amateur people interested in the group would be much lower than the equivalent public in birdwatching, so the series would be commercially riskier. But we were convinced of the project’s importance for science and conservation, so we decided to look for some support to make it happen.
We were extremely fortunate to find this support in the form of two Chief Editors for the series that were essential for its success. On one hand, celebrated primatologist Russ Mittermeier joined the project, bringing his own knowledge to the series, as well as achieving important funding, most notably from Conservation International, to get the project off its feet. Russ also enlisted the involvement of IUCN, International Union for Conservation of Nature, further emphasising the importance of conservation in the series, and drawing from the expertise of many of the IUCN Species Survival Commission (SSC) Specialist Groups.
On the other hand, Don Wilson, at the time Chairman of the Department of Vertebrate Zoology and Curator of the Division of Mammals at the National Museum of Natural History of the Smithsonian Institution, generously volunteered his time and effort to help the project, and this continued throughout the series in many different facets. For example, Don’s help was especially useful for finding and contacting the specialists to author the chapters, as well as for providing a strong taxonomic base with his book Wilson & Reeder (2005), Mammal Species of the World. A Taxonomic and Geographic Reference (3rd ed).
We are very grateful to both Russ and Don, and to the other Chief Editors and external supporters who made the project possible.

2. Volume 1 was Carnivores, a very charismatic order of mammals; when this was published in 2009, did you already know how many volumes the series would contain, and in what order they would be published?

ALBERT: We proposed Carnivores as an exploratory volume to study the viability of the project as we felt that it could be one of the volumes with the greatest interest for the readers.
When the first volume was published and once it was proven that the series was viable, we agreed shortly after with the Chief Editors, Don Wilson and Russ Mittermeier, on the total number of volumes in the series—eight—and their order. In the first preparatory meetings it was quickly decided not to follow a strictly phylogenetic sequence, and so, for instance, walruses, seals, and sea lions were treated along with the rest of sea mammals and not in the Carnivores volume.
The most important departure from the original plan was the need to split rodents into two volumes: Volume 6 and Volumes 7, in order to maintain the level of detail that had characterised the previous volumes. This decision was made after direct consultation with HMW subscribers (of 1840 respondents, 92% favoured two volumes). So, the series was extended from eight to nine volumes.

3. Could you provide a rough idea about how much hard work goes into publishing a single volume in the series?
ALBERT: The work is immense and summary numbers for the series are impressive (c.8000 pages, 443 colour plates, 5300 photos, 6400 range maps, 10,000s of references), as is the number of the people involved: 312 authors of texts, 10 artists, and more than a thousand photographers from all over the World.
The editing process for a single volume lasts between one-and-half and two years, it begins with the commission of the different families to the authors of texts and the plates to the artists. The in-house editing phase has lasted about a year in the last volumes. The first three volumes appeared with a cadence of two years, but from HMW4 on we have managed to publish a volume per year without fail.

4. Is there a certain family or order of mammals you are particularly fascinated by?
ALBERT: It is difficult to choose, but maybe Carnivores, Hoofed Mammals, or Primates. Also Marsupials as they are really exotic and give us a very clear idea of the big conservation threats that face island species or species with reduced ranges. Looking at the distribution maps you become very aware of the high number of species with tiny distributions and those that only survive thanks to strict conservation measures.

5. What challenges did you face along the road to completion of this series?
ALBERT: During the 11 years of editing the HMW series (2009–2019) and with so many people involved, we have faced all kinds of difficulties with authors, artists, and editors (illnesses, accidents… and even Brexit at the end!). Especially complicated has been the instability in the taxonomy with habitual last-minute changes in the final stages of the editing process (e.g. new species described, rearrangements in the sequence of the species due to improvements in the knowledge of phylogenies, etc), which have forced us to completely redo already laid-out families many times. Despite such challenges, I want to highlight the impressive enthusiasm and dedication which all the participants have shown for this project.
It is very rewarding to see the commitment and effort that many experts have put into the project, having themselves seen in the HMW series an important achievement in their field of work. The selfless collaboration that we have received from a multitude of specialists not directly involved in the project has helped us in many ways, like providing material to allow the artists to draw rare species.

6. What do you hope will be the legacy of the Handbook of the Birds of the World and the Handbook of the Mammals of the World series?
JOSEP: Since we finished the HBW series some years ago (2013), we now have a better perspective on what this legacy may be. We have some indications that show that HBW, which covered all the birds of the world for the first time ever, represents a “before and after” in knowledge and interest in birds. It is true that before HBW there was a good deal of interest in birds in parts of the world like Europe, North America, Australia or South Africa, but in many other parts of the world, including in Tropical Regions with the richest biodiversity, there was a clear lack of even the most basic information. So we think the existence of the series has helped a bit to balance this situation, and has been an influence so that now many more people are interested not only in birds of their own country, region or local patch, but also at the global level, which we are convinced is good, eventually, for conservation.
With the HMW series, which we are just finishing now, we think similar effects will appear. While with birds the interest across the families was more or less regular, mammals have an added complication that some groups receive much more attention than others. So we think that the volumes dedicated to groups like rodents and, especially, the last one dedicated to bats, will be important for bringing together the knowledge that was much more disperse and less accessible, in a single, comprehensive treatment. This will also show where there are still gaps in the knowledge to encourage further study.

7. How do you feel about the imminent fruition of over ten years of publishing the Handbook of the Mammals of the World series – do you have any new projects in the pipeline that you can tell us about?
JOSEP: Well, we have several big projects that we are studying carefully, but we are also aware that the number of people interested in other groups of biodiversity is many times smaller than those interested in birds and even in mammals. But a number of good possibilities do exist, particularly if there is an awareness that such coverage gives a push to the knowledge and conservation of the group.

Meanwhile, we are still very busy with birds and mammals. For birds we published the HBW and BirdLife International Illustrated Checklist of the Birds of the World in two volumes and we are already working on the equivalent illustrated checklist for the mammals. Also, given the important patrimony we hold of the illustrations of all the birds of the world, we have started the Lynx and BirdLife International Field Guides Collection, which is producing good results, and we hope we can pursue a similar line with mammals. In this way, the two Handbook series can help us create field guides to countries for which they are none, thus, raising awareness and knowledge, which in turn can lead to greater local conservation.

HWM, Volume 9: Bats and the complete Volumes 1 to 9 are available at a special pre-publication price until the end of September Handbook of the Mammals of the World, Volume 9: Bats
Oct 2019 *124.99
The final volume in this monumental series profiles the world’s bat fauna.