James Lowen is your guide to A Summer of British Wildlife

James Lowen is a wildlife writer, editor, guide and photographer. Immersed in all aspects of natural history from a young age, he has spent several years leading wildlife tours in South America and Antarctica. Now back in Britain, he continues to express his passion for bringing nature to life for the non-specialist, and has turned his attention to British wildlife. A Summer of British Wildlife: 100 Great Days Out Watching Wildlife – his second book on the subject – is out now.

How did you come to write this book?

The concept of A Summer of British Wildlife grew out of my previous book for Bradt Travel Guides, 52 Wildlife Weekends: A Year of British Wildlife-Watching Breaks (also available from NHBS). Whilst writing that guide, I realised that Britain in summer possesses such an abundance of natural riches that I could not possibly squeeze them all into a single book! In his review of 52 Wildlife Weekends for British Wildlife magazine, celebrity wildlife-blogger Mark Avery suggested that I might have lavished summer with ‘long weekends’. That got me thinking about the 100 best wildlife experiences that Britain has to offer over each and every summer.

How did you choose what to include in the book?

Good question. There was so much to write about that I could probably have produced this book three times over! In whittling down the worthy longlist, I took account of principles such as how best to cover the breadth of British wildlife experiences (from bumblebees to basking sharks, orchid-rich meadows to seabird skyscrapers), geographical spread (the days out stretch between Scilly and Shetland), and the likely interest for families (using my 5-year-old daughter as a barometer). Fundamentally, however, I had to be personally excited by the experience: if not, I wouldn’t be able to inspire others to travel.

There is a strong ethical element to wildlife travel these days – how does the book support that?

This is not a guide to particular travel operators or service providers, which is how ethical considerations are typically framed nowadays. Instead, the book takes a wider approach to ethics. By focusing on Britain, I commend ‘staycations’, which largely avoid the greenhouse gas emissions of aircraft travel. By encouraging people to visit reserves run by particular wildlife charities, I encourage people to reward those land-managers with their custom. I stress the guiding principle of responsible wildlife-watching, namely that the welfare and conservation of species supercedes our enjoyment of them. Following advice from reserve managers, I remain silent about wildlife experiences about which I would love to have written; red helleborine and spiny seahorse are notable examples. Finally, by homing in on children’s interests, I seek to inspire the next generation of wildlife-watchers. If our offspring do not love wildlife, there will not only be no wildlife travel (ethical or otherwise) in future… there will be no wildlife either.

Can anyone enjoy this book or do you need lots of outdoor gear?

You don’t need any outdoor gear to enjoy nature. Just some combination of locomotion, eyes and ears. Clearly, some specialist outdoor gear can help – whether binoculars, digital cameras or moth traps – so if you want an enhanced experience, you might want to browse the NHBS equipment catalogue.

What stands out about the book as a read?

You should probably ask a reader that, rather than the author! Everyone will have their own take on what stands out from the book, just as they have their own idea of what stands out in the spectrum of British wildlife. But I will convey some thoughts from the very first review of the book, by naturalist Amy-Jane Beer in BBC Wildlife magazine (April 2016 issue). Amy-Jane says that the book “will fuel your imagination, frame your desires and simplify your logistics for the summer ahead”. Amy-Jane considers that the book “maintains a lovely tone, necessarily practical but also occasionally poetic – a friendly, encouraging and knowledgable companion”. She concludes that the guide is “an ideal addition to any family bookshelf, though it should also spend plenty of time in your backpack or glove compartment”.

Are the experiences in the book weatherproof?

Ha! Most are yes, which is just as well given the erratic nature of British weather. Where particular weather is key, such as searching for mountain ringlet (a rare butterfly) in Perthshire, I make this clear. Of course, some days benefit from inclement times, such as looking for windblown shearwaters off the Cornish coast!

Are there any unexpected, unusual, or surprising entries in the book?

What will flabbergast one person may appear mundane to another, so that is hard to answer. I cover what I feel to be the very best of British wildlife, but that doesn’t mean it is all universally well known. So I suspect that some eyes may open wide at my suggestion to spend a morning looking for the globally threatened tansy beetle near York, or to combine a family day on the beach with watching dune tiger-beetles scurry along the sand. Some may also be amused at my cheek in proposing that we go looking for red grouse in the Peak District on August 11, the day before the hunting season commences.

How does Britain compare to the rest of the world as a wildlife destination?

I have gone wildlife-watching in about 60 countries worldwide, and have written books about the wildlife of Antarctica and Brazil. When I returned to Britain from four years living in Argentina, I thought I would be bored by British wildlife. Not a bit of it. This book, and its predecessor (52 Wildlife Weekends) are testament to the exhilaration that I feel every single time I set foot outside my door in search of wildlife. There are 60,000 species of ‘thing’ in Britain, and I have seen just 3% of them. There is loads more out there that I need to track down!

Where are you going for your summer holidays this year?
As a family, we plan to spend lots of time exploring our new home county of Norfolk: camping, kayaking and walking our way through the wilds.

What do you like to read on your travels?
I am usually too busy watching wildlife while travelling to actually read anything. But I always take a book for the journey. On my last trip (to wintry Japan; see my images here), I read George Monbiot’s Feral. On my next trip (a family holiday to Spain) I will be taking the memoir of my childhood hero, Chris Packham: Fingers in the Sparkle Jar. 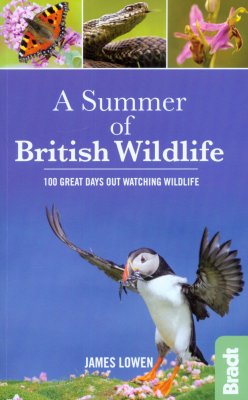 A Summer of British Wildlife: 100 Great Days Out Watching Wildlife is available now from NHBS