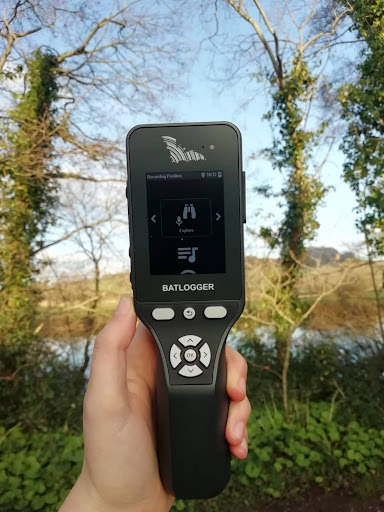 The Elekon Batlogger M2 is a sophisticated bat detector, designed for use in active transect surveys and bat walks. The detector is ergonomically designed and compact in its build. Unlike the Batlogger M, the replaceable microphone is set back within the casing, reducing the chance of breakages if accidentally dropped.

It is an easy-to-use detector, able to record ultrasonic calls over a wide range of 10-192Hz, retaining details of the harmonic structure and amplitude of the original bat call.

This detector also includes features for real-time heterodyne monitoring scheduled recording and several preset recording modes for typical survey types, including ‘Explore’, ‘Transect’ and ‘Passive’. There is also an option to create your own presets, with all settings accessible directly on the Batlogger M2.

The recordings can be easily and quickly managed and analysed using the free BatExplorer Software for Windows. This software also includes computer-aided species identification. 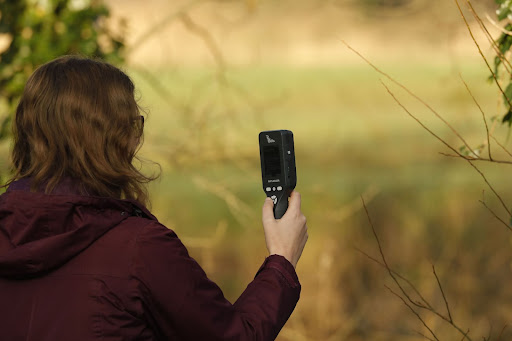 In August 2021, we tested the Batlogger M2 on Dartmoor in South Devon at dusk. We chose an area with both open moorland and woodland to monitor the dusk emergence of several bat species. Using the ‘Explore’ recording mode, the device was set to real-time heterodyne monitoring, with the trigger settings selected to 45Hz.

The recordings were stored on a 16GB MicroSD card, output via WAV and XML. The files can be easily transferred to your computer with the included cables (a USB-C to USB-C cable and a USB-C to USB-A adapter) however, we simply used an SD card reader to access and transfer our recordings.

Elekon’s ‘BatExplorer Lite’ software was used to visualise and analyse our recordings.

At only 222g, this device is lightweight, therefore it was not a hindrance when hiking to the site. It was easy to hold and operate in low light, which is important as it will often be used in conjunction with other equipment while undertaking surveys. However, the buttons do not light up or glow in the dark, therefore it is important to familiarise yourself with the setup beforehand.

Our survey used the ‘Explore’ recording mode however, we looked briefly at the other preset modes and felt they would be very useful if carrying out these types of surveys. In particular, the ‘Transect’ mode allows you to pre-program the detector with your own GPS survey route, which will then display directions to keep you on path.

Setting up our recording session was quick and easy. When triggered, the detector automatically recorded the calls in full-spectrum, therefore no further operation was required. Each recording logs the GPS location, temperature, humidity and brightness at the time of recording, so there is no need to bring separate equipment for these parameters. The device also has an integrated voice microphone to enable you to take time-stamped voice notes while surveying, which allows for more accurate note-taking than writing in the dark. 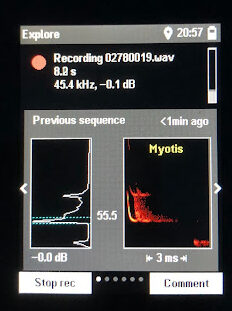 The screen display was bright and easy to view in the dark. The main screen shows the current recording time and frequency, as well as amplitude and harmonic structure of the previous bat call, the time since the last sequence and the species suggestion for that recording. The other recorded information can be accessed by pressing the left and right buttons to switch screen displays, allowing for an uncluttered screen and fewer distractions.

We tested the detector’s audio output with both earphones and through the built-in speakers (includes an adjustable volume). Both had clear audio with little background noise. 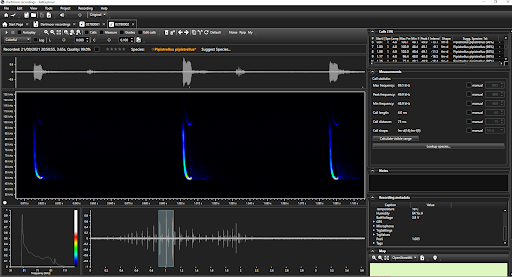 We recorded multiple calls including over 60 calls during one 30 minute survey. We were impressed with the quality of the recordings and the lack of ambient noise assisted in the identification of calls.  It is worth noting that the M2 uses a SiSonic microphone, whereas the older Batlogger M uses an FG Knowles microphone, so experienced Batlogger M users may notice a slight difference in their recordings.

Automatic species identification was not always to species level, with some recordings having no suggested species. Those that were suggested, however, appeared mostly accurate when we analysed the recordings via the BatExplorer software.

The Batlogger M2 by Elekon is a very easy-to-use and accessible detector. The preset recording modes are useful for almost all circumstances and allow quick survey set up without the need to trawl through complicated settings – particularly helpful for newer ecologists. The only limitation we found was the lack of visual aids for the buttons in the dark, however, this can be easily overcome by familiarisation and repeated use.

It is clear from the design of the M2 that Elekon has acted on feedback from the Batlogger M and have created an intuitive detector with a robust build, perfect for any survey needs.