Seeds of Science: An interview with Mark Lynas

Mark Lynas is an author, journalist and environmental activist. He has previously written books on climate change (including High Tide: News from a Warming World and Six Degrees: Our Future on a Hotter Planet) and the Anthropocene (The God Species: How the Planet Can Survive the Age of Humans). A one-time anti-GMO activist, Mark changed his mind on genetically modified organisms while researching his books on climate change. Seeds of Science: Why We Got it so Wrong on GMOs chronicles Mark’s conversion and examines the widespread opposition to GMOs and the damage this is doing. I contacted Mark to talk more with him about GMOs, and about his new title, which is published this week.

We have been domesticating crops for millennia, and you write that radiation is an accepted method to induce genetic mutations. Such plants can even be labelled “organic”. Effectively, there is a continuum from very crude tools (domestication) to more precise ones nowadays to achieve the same end goal: plants with traits that we desire. Why has recombinant DNA technology been singled out by activists?

I think that if mutagenesis by radiation were invented tomorrow, Friends of the Earth would be up in arms. I suspect that it really is a matter of grandfathering with these kinds of technologies. The newer ones get opposed because they seem too new, for want of a better way of putting it, too innovative and too artificial, whereas we are comfortable with the older ones because they have always been there. As I say in the book, your pet dog is genetically modified from the original wolf, otherwise you would not let it anywhere near your children. But if a scientist in a labcoat were to propose to genetically modify a wolf directly in the laboratory, in order to give it a pug nose and make it unable to breathe properly, I am sure there would be all kinds of hullabaloo. So, it is about being comfortable with something that has become traditional, which maybe was innovative decades or centuries ago, but has become part of our established normality.

These things are socially constructed debates, they are not really a result of scientific innovation directly, they are a result of interest groups deciding that they are opposed to specific innovations for specific reasons. So, there has not been any significant opposition to the use of genetically modified bacteria or micro-organisms to produce insulin for diabetics, or rennet for cheese, or multiple other biotechnological applications. It is very much about opposition to some kind of perceived adulteration of the purity and authenticity of food, especially because food has got such powerful cultural and deeply political meaning.

I would include seeds in that as well. So, the concept of the seed is a very politically significant one. The idea that farmers must control seeds, that seeds are a kind of inherited genetic common property that have been enclosed and privatised by corporations – for people with particular political views these are very powerful concerns.

Effectively, we have been consuming GMOs for millennia, ever since we started eating domesticated plants, with no ill effect on our health. Has the health scare not wasted tremendous amounts of time and money in unnecessary research that, as we could have known beforehand, showed that there is no danger to consuming GMOs?

The health scare is something I was never involved in promoting. Looking back at the things I wrote, I alluded to it a couple of times, but it certainly was never a central concern.

As I explain the book, realising there was a scientific consensus on GMO safety which was equivalent to the consensus on climate change was a big part of why I changed my mind. While I do not claim that science can answer all of the political and economical questions, if we could all at least agree that this technique is as safe as any other, and probably safer in terms of changing crop genetics to be honest, then we can move on to talk about the other topics sensibly. But so long as you have got activists out there, particularly in developing countries, spreading rumours and myths about GMOs causing cancer and sterility then I think that that is so objectionable that it has to be opposed directly, just as we do with anti-vaccine campaigners which are out there doing real damage to public health.

So, do you think that the argument that we have been eating animals and plants that have been genetically modified through domestication with no ill harm is one that will resonate with activists?

No, because it is not about the facts. You can present evidence until you are blue in the face, but that hardly changes anybody’s minds. You have to look at why there is this opposition, and the reason it has persisted for so long is that is has become an article of faith for a lot of people with a particular ideological bias. And that is not just on the left. Yes, there is an anti-corporate aspect to this, but it is also found on the right. It has recently come to light that the Russians have been promoting anti-GMO memes as a way of undermining public trust and the integrity of Western science. And you can see it from the extreme right in France: Le Pen is anti-Monsanto and anti-GMO. The same goes for the far-right and the far-left in Italy. It has become a kind of populist rallying cry which can be put in the context of this wider loss of trust in elites and intellectual expertise generally, which is a story of our modern times. It saddens me that the environmental movement is part of this shift towards post-truth, at least in the GMO sense, but it just goes to show that it is not resulting from any singular political perspective

In the Q&A session of your 2013 talk at the Oxford Farming Conference, you mention that the opposition to GMOs is effectively a proxy war against modern agricultural methods.  Why do people not make a distinction between the tool (genetic modification) and the wielder (in most discussions this ends up being big agricultural companies such as Monsanto)?

I am not even sure it is the business practices of Monsanto in any real sense. If you ask people what it is that Monsanto supposedly does, you will often get a lot of internet-generated myths. I included a whole chapter on Monsanto in the book, precisely because I felt that this was an elephant in the room that needed to be dealt with, and I needed to go through some of the anti-Monsanto memes out there and try and identify what was real and what was not. So, yes, I think there is a conflation between GMOs and modern agriculture in general with certain people in the West. This is quite an elite phenomenon; certain foodie types feel that the food system is failing them. It is kind of conflated with packaging, supermarkets and being disconnected from the local and the authentic. So, it is a kind of wider Romantic movement against what is perceived to be the dominance of technology in modern life. There is a nostalgic appeal to what the traditional farm was – with the farmer in overalls, chewing straw and getting his hands dirty – which is not there with the image of a modern farmer sitting high up in a cab of a combine harvester on Facebook while his machine is driven by GPS or even robotics. It does not have the same emotional appeal to it. So, I think there is this feeling of alienation with the modern food system in general, which I think has driven a lot of this opposition. 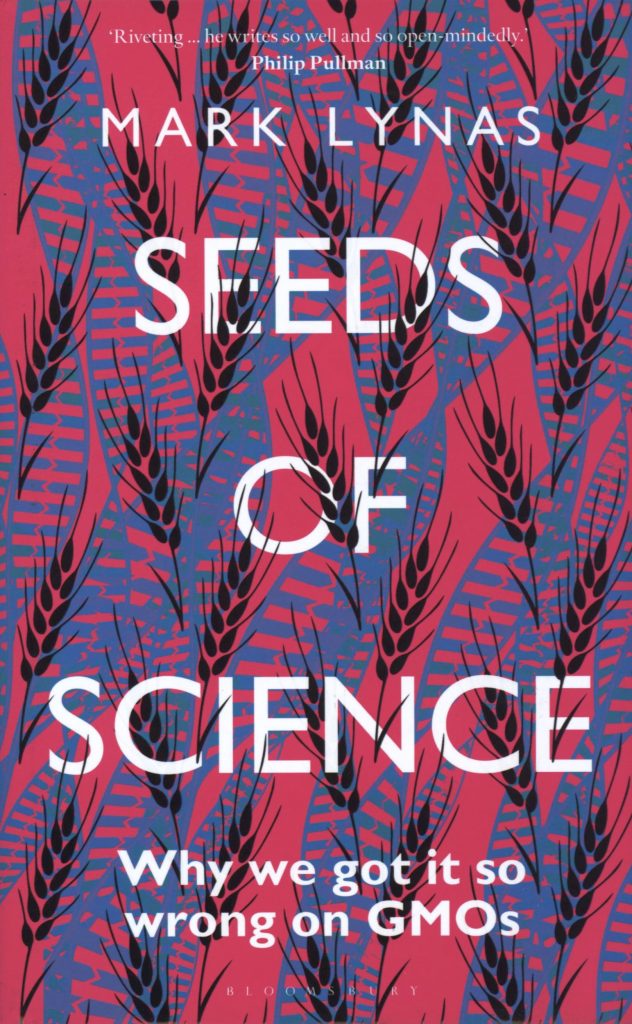 One reason I can think of why people oppose GMOs is a lack of understanding the science. How much are current high-school curricula paying attention to basic genetics, especially in the context of biotechnology in agriculture? Can we do more here and in the future see a new generation of better-informed citizens?

Well, that would be nice, but I do not think that it is essential any more than people need to understand immunology in order to have their children vaccinated. Yes, I am a passionate supporter of increasing science literacy, and I think it is important for a functioning democracy in a very general sense that we have a population who understands at least the basics. But it would not help – this is a political controversy. Even increasing science literacy does not help to diffuse it, because it is not really about the science. The scientists are not disagreeing on any of this. It is the same with climate change where people with different political viewpoints then claim to differ on the science. Presenting more scientific evidence does not help to resolve it, we have to make sure that the evidence is not steamrolled by emotional appeals by people who have an ideological interest in diminishing public understanding of science.

You seem intent on putting an end to the polarised discussion and the trench warfare as you call it. I believe this is a large part of why you wrote this book. With this book about to be published, what more can we expect to see from yourself and others to try and bring the two sides closer together?

As I say towards the end of the book, the first draft was an angry book about how evil the anti-GMO movement is and decrying all that. And then I threw that away and rewrote it because I did not want to deepen the polarisation. I wanted to make a more honest attempt to understand where people are coming from who still oppose this technology. I felt it was incumbent on me as a former activist myself to do that in as humble a way as possible. So, I went back and talked to people who are still activists who I used to work with back in the day and I tried to give them a fair hearing. I think it is important that we recognise what these concerns are and that they are genuinely held. It is very easy to characterise your opponent as being evil or corrupt. However, people who oppose GMOs think they are doing the right thing. You can say that the road to hell is paved with good intentions, but if we at least do each other the honour of recognising that we are all trying to make the world a better place, then maybe we can meet somewhere in the middle by respecting each other’s concerns and worldviews so we can try and figure out what we have in common.

I say this in learning from the experience of climate change where I have been guilty of this as much as anyone. Through shouting and fighting we have just polarised the situation, and I think it is further away from being solvable now than it probably was back in the late nineties when I started working on it.

Seeds of Science is available to order from NHBS