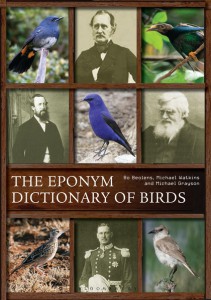 This month sees the publication of Bo Beolens’, Michael Watkins’ and Michael Grayson’s The Eponym Dictionary of Birds – a major publication with over 4,000 entries to fascinate the curious-minded birder. Each entry explains the biography behind the people commemorated in bird names, from lesser-known but dedicated collectors to officers, dignitaries and royals. Such as:

Professor Carlo Passerini (1793-1857), an Italian entomologist and an early enthusiast of scientific photography, and Colonel Thomas Knight Salmon (1840-1878), a British railway engineer whose lung disease forced him into retirement and to opening a naturalist’s shop, are perfect examples of the hundreds of entries concerning those dedicated relative unknowns whose efforts have added rich threads to the natural history of birds and beyond. Salmon’s health deteriorated and he travelled to Colombia for the better climate where he spent seven years. He died in England leaving a collection of 3,500 bird skins.

This entry exemplifies a theme of dedicating the naming to one’s spouse, in this instance Adelie Dumont d’Urville (1798-1842), the wife of Admiral Jules-Sebastien-Cesar Dumont d’Urville, who first found this penguin. Various places in and around Antarctica were similarly honoured, including the Adelie Coast.

It is not only the eponymous common names that are included. So many latin names contain dedications too, for instance:

The Red-headed Parrotfinch, Erythrura cyaneovirens gaughrani was named after American waterpolo player Dr James ‘Jim’ Alan Gaughran – who, apart from appearing at the 1956 Olympic Games and acting as head coach of Stanford University’s waterpolo team from 1969-1973 – was with duPont on the 1970 expedition to Western Samoa during which the parrotfinch holotype was collected.

Dig around and it won’t be long before you discover some familiar territory:

Lewis’s Woodpecker is named after Captain Merriweather Lewis (1774-1809), one half of famous explorers, Lewis and Clarke. Their expedition of over 4,000 miles across the North American continent was rich in discoveries, not least the collection of the holotype of this woodpecker. It was collected in near Helena, Montana, and is now in Harvard, perhaps the only bird specimen left from the expedition.

Finally, it must be worth mentioning that the Great Egret has been known as Queen Victoria’s Egret. Victoria was opposed to the feather trade and ordered her regiments to stop wearing plumes in their uniform, giving her a royal place in bird conservation.