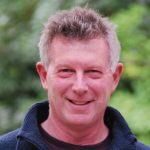 Stephen Moss is a naturalist, broadcaster, television producer and author. He is the original producer of the BAFTA award-winning series Springwatch and has worked with David Attenborough, Chris Packham, Alan Titchmarsh, and other leading naturalists. Passionate about communicating the wonders of nature, he also lectures in Nature and Travel Writing at Bath Spa University. Originally from London, he lives with his family on the Somerset Levels and is President of the Somerset Wildlife Trust. 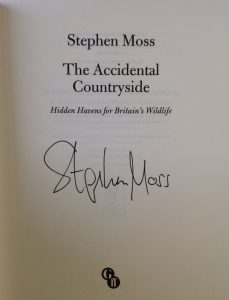 In The Accidental Countryside: Hidden Havens for Britain’s Wildlife, Stephen writes about the secret places, that are often overlooked when it comes to protecting habitats and wildlife. Stephen has given his time to sign copies and answer our questions about these vital habitats in our hidden corners.

What inspired you to write about the ‘hidden havens’ for Britain’s Wildlife?

I’ve always been fascinated by these forgotten and secret places, that are often overlooked when it comes to protecting habitats and wildlife. As I say in the book, I first got my passion for the natural world by visiting the gravel pits near my suburban home; today I live near the Avalon Marshes in Somerset, another post-industrial habitat, created from disused peat diggings. During my career at the BBC Natural History Unit, I often filmed at these edgeland locations, as they harbour such a range of interesting wildlife, and are often more accessible to people than classic nature reserves in the countryside.

Of all the places you visited, which habitat surprised you the most regarding its biodiversity?

That’s a tricky one, as I think they all surprised me in some way or another. The Avalon Marshes is probably the most packed with wildlife – three species of egrets, marsh harriers, bitterns and the famous starling murmurations on winter evenings – but I also loved the Montiaghs (in rural Northern Ireland, where peat was dug by hand), Parc Slip in South Wales (a former open-cast coal mine) and best of all, Canvey Wick in Essex, Britain’s first brownfield nature reserve, and a paradise for invertebrates including rare dragonflies and damselflies.

Your book features exceptional and inspirational people that have found ways to make the most unlikely places wildlife friendly. Is it possible to highlight just one project that has succeeded against the odds?

Again, the Avalon Marshes stands out: once the peat had been removed, we were left with an ugly, scarred and wildlife-free landscape, which it was suggested could be used as a landfill site for Bristol’s domestic waste. Thanks to a local campaign, they were instead turned into nature reserves; thirty years later this is one of the best places for wildlife in the whole of the UK. Others include Canvey Wick, which again could have fallen to the developers; the roadside verges of Blandford Forum in Dorset, which are now awash with wildflowers and butterflies each summer; and the RSPB’s Window on Wildlife at Belfast Docks, home to breeding Arctic Terns.

Is there one habitat that you think hasn’t reached its wildlife friendly potential?

That’s easy! The rest of the ‘official’ countryside – the 70% of the UK that is used for farming. Of course we need to produce food, but not at the expense of wildlife, which is what is happening on the vast majority of farms at the moment. Some visionary farmers are working with conservationists to buck the trend – for instance, the Marlborough Downs Nature Improvement Project in Wiltshire – but most are simply fulfilling the consumer and supermarkets’ demands for cheap food, whatever the cost to the environment.

You have been writing for many years and unfortunately, wildlife has suffered a substantial decline over the last few decades. Has your recent experience writing The Accidental Countryside left you more optimistic or more pessimistic regarding the future of wildlife in the UK?

I’d love to live in a country where the sites I feature in The Accidental Countryside are not important because the wider countryside has been transformed into a haven for wildlife. But I’m not holding my breath, despite the things we hear from the government. Now, more than ever, we need to understand that a healthy, wildlife-filled environment is not some ‘bolt-on extra’ to our lives, but essential – to the health and well-being of nature, of ourselves, and of course for the planet as a whole. So I have to be optimistic: there is no other choice!

Are there any books or projects that you are currently working on that you can tell us about?

Yes, I am just about to deliver the third in my series of ‘Bird Biographies’ for Square Peg (Part of Penguin Random House). Following bestselling books on the Robin and the Wren, I am now writing about that classic sign of spring and summer, the Swallow. I am a late convert to Swallows – only since I moved from London to rural Somerset in middle age have I grown to appreciate this classic bird of the British countryside. Writing this book, I have also grown to appreciate that the swallow is, as the writer Collingwood Ingram once noted, “beyond doubt the best known, and certainly the best loved, species in the world.” 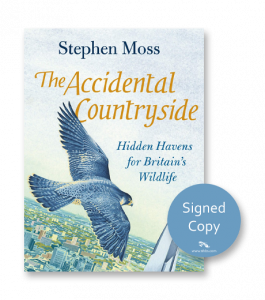