The NHBS Guide to UK Chat and Flycatcher Identification

Chats and flycatchers are birds in the Old World flycatcher family, the Muscicapidae. They are small passerine birds and are mainly insectivores. Chats (subfamily Saxicolinae) were originally included in the thrush family, Turdidae, but were reclassified after genetic analysis. Several chats and flycatchers have a number of subspecies, although the classification of these species is often contested.

This family contains many well-known species, such as the nightingale and the robin, which have important cultural connections and have inspired many songs, fairy tales, artworks and poetry. The nightingale’s song has been an important symbol for many poets and writers, often depicted as a mournful lament. The robin has featured prominently in British folklore for centuries, with a strong association with Christmas beginning in the mid-19th century. In both the 1960s and 2015, the robin was voted as the unofficial national bird of the UK.

Many of the birds on this list are striking examples of our wildlife but some now face a serious threat of extinction in the UK. Several have been listed on the birds of conservation concern 4 (BoCC4) red list, such as the pied flycatcher and whinchat, due to their severe population declines. These declines have been attributed to several different threats, including agricultural intensification, climate change and nest failures caused by mowing.

Distribution: Summer migrant, visiting between April to July/August, Found mainly in the south east, east of England, south west and areas of the east and west Midlands.
BoCC4 status: Red
What to look for: The nightingale is a brown species, with a paler throat and underside and a reddish tail. They have pale, pinkish legs and a small beak that is yellow and grey.
Did you know? There are three accepted subspecies, the western nightingale (L. m. megarhynchos), which visits the UK, and the caucasian (L. m. africana) and eastern nightingale (L. m. golzii).

Distribution: Rare. During the summer, they’re found mainly in Greater London, Birmingham and the Black Country, with scattered pairs in Liverpool, Manchester and along the south coast between Suffolk and Dorset. During the autumn and winter months, they can be found along the south coast and areas of Wales and Scotland.
Birds of Conservation Concern 4 (BoCC4) status: Red
What to look for: This species is a similar size to the robin. Males are grey-black with a red tail, dark brown wings and a dark black face. Its underside is lighter and it has paler fringes on its secondary feathers, forming a whitish panel. Females are browner and lighter, with the same red tail. They have darker wingtips and a black beak.
Did you know? There are several subspecies of the black redstart, with different authorities accepting between five to seven subspecies, generally separated into three major groups according to DNA sequencing, biogeography and morphology. The subspecies that visits the UK is P. o. Gibraltariensis, one of the two European subspecies.

Distribution: A summer migrant, found in the north and west of the UK, with the greatest concentrations in Wales.
BoCC4 status: Amber
What to look for: The redstart has a distinctive bright orange-red tail. Males are black and grey with a red underside and black legs. Their face is black and their crown is grey, with a white patch across the forehead. Females are duller, with a greyish-brown colouration but still have red tail feathers.
Did you know? There are two subspecies accepted for this species. The one that migrates to the UK is P. p. Phoenicurus, the other subspecies, P. p. samamisicus, is found in the Crimean Peninsula, Turkey, the Middle East and parts of Central Asia.

Distribution: Present across much of Scotland and Wales, parts of Northern Ireland and parts of England, particularly the south coast and the east of England.
BoCC4 status: Green
What to look for: During the summer, males have a black head with white patches on either side of their throat, a rust-red breast, streaked dark brown wings and a pale underside. During the winter, they are brown with a rust-brown breast. Females resemble the male winter form, although they are a lighter brown with a whitish throat.
Did you know? There are two currently recognised subspecies, S. r. hibernans (present in the UK) and S. r. rubicola. S. r hibernans is the darker subspecies, with less white than S. r. rubicola.

Distribution: Much of Scotland, Wales, Ireland and northern England, as well as parts of the coasts of south east and south west England.
BoCC4 status: Green
What to look for: The males have a blue-grey upperside, black wings and a white underside, with an orange breast and throat. They have a black mask, edged above and below with white. Females are brown, with dark wingtips and an orange breast and throat, with no black mask. Both have a white rump and tail, with a black T-shape on their white tail. Immature and non-breeding birds lack the contrasting black wings and are buff coloured.
Did you know? There are four accepted subspecies, two of which have been recorded in the UK, O. o. oenanthe and O. o. leucorhoa.

Distribution: Summer migrants to Scotland, Wales and the north and north east of England. They can be found in other areas during their migration, such as parts of the south west and Ireland.
BoCC4 status: Red
What to look for: This species has a pale eyestripe, dark cheek and crown, and a pale chin. The males have a streaky brown upperside, with a buff-orange breast and throat during the breeding season, but females are paler. Male whinchats have a dark tail with a white underside, while females have a paler tail with a white underside.

Distribution: This is a rare species and can be seen on passage between May to June and August to October, usually along the east coast of the UK.
BoCC4 status: Not assessed
What to look for: Two subspecies visit the UK, the red-spotted bluethroat (L. s. svecica) and the rarer white-spotted bluethroat (L. s. cyanecula). Both species have grey upperparts and white underparts, with a chestnut-coloured patch under their tail. The males have a bright blue patch on their throats, which is where the two subspecies differ. The white-spotted bluethroat has a patch of white on its throat within the blue patch, whereas the red-spotted bluethroat has a chestnut coloured patch. Under this patch on both subspecies is a half-moon of black and another of chestnut feathers. The beak is black, with yellow colouration on the inside and a yellow gape flange, the area where the upper and lower mandibles of the beak join together at the base.

Distribution: A summer migrant present in Wales, the north west of England, and parts of the south west and Scotland.
BoCC4 status: Red
What to look for: Male pied flycatchers have a mostly black upperside and white underside, with a white patch on the folded wing. Females and non-breeding males are browner, with a brownish chest and a less bold white wing patch. They have a black beak, and breeding males have a small white patch above it.
Did you know? There are four recognised subspecies, F. h. hypoleuca is the subspecies that visits the UK but there is some suggestion that F. h. tomensis (formally F. h. sibirica) has also been recorded in Britain.

Distribution: Widespread across the UK between April to August/September.
BoCC4 status: Red
What to look for: The spotted flycatcher is a streaked grey-ish brown species, with a pale underside and a streaked breast and crown. They have a dark beak and legs and are a similar size to a house sparrow (Passer domesticus).
Did you know? There are five recognised subspecies of spotted flycatcher. The subspecies that migrates to the UK is M. s. Striata.

Distribution: Widespread across the UK.
BoCC4 status: Green
What to look for: This well-known bird has brown upperparts, a brown crown and a red face and breast. It has a pale underside and a grey stripe from its eye to its side, between its brown and red plumage.
Did you know? There are multiple subspecies of the robin, although the exact number is contested. E. r. melophilus is endemic to the UK and there is some suggestion that E. r. rubecula, the western European subspecies, has also been recorded here. 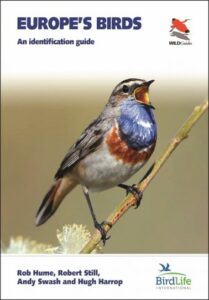 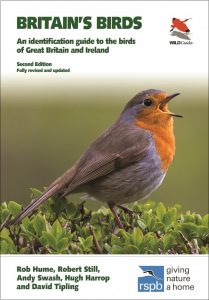 Britain’s Birds: An Identification Guide to the Birds of Great Britain and Ireland Where to Watch Birds in Britain