The season is finally upon us when sun-loving dragonflies are emerging from their aquatic homes. The cold beginning to the year has certainly delayed their appearance, but flashes of blue and green are now being seen above our local ponds and streams.

The name dragonfly is often used to refer to insects of the order Odonata, that includes both the actual dragonflies and their close relatives, the damselflies. In this blog we will use the word dragonfly to describe only the genuine dragonflies from the sub-group Anisoptera.

Although initially very similar in appearance, dragonflies and damselflies can be easily told apart by a few identifying features. Dragonflies tend to be larger and bulkier insects overall with significantly larger eyes when compared to the slim built and rather delicate damsels. When at rest dragonflies hold their wings open whereas damsels remain closed.

These insects are not only beautiful but are also very important members of freshwater ecosystems. They manage populations of smaller prey species such as mosquitos and provide a source of food for many birds including wagtails, kingfishers and hobbies. They are a reliable indicator of good quality freshwater.

There are just under 30 species of dragonfly living in the UK. Identification of these is primarily performed using the patterns and colouration of the thorax and abdomen, although some particularly similar species need the finer details, such as leg colour, to be examined.

Below are ten of the most common and widespread species you are likely to spot, split by taxonomic family.

Hawkers (also known as Darners) are a family of large rather ‘traditional- looking’ dragonflies. They are very strong fliers, often seen flying forwards and backwards and hovering in mid-air. The name hawker, meaning to hunt on the wing, references their ability to catch prey in flight using their feet or mouthparts. Hawkers rarely come to rest, making identification more challenging than other groups.

Appearance: A large black or brown dragonfly with blue spots along the body.
Look out for: Two extended yellow lines on the thorax (highlighted in the image) make it possible to separate the male of this species from its counterpart, the migrant hawker. The patterns on the abdomen that are also highlighted below also differ and will be explained further below.
Months active: June – October
Size: 7.4cm

Appearance: Overall, very similar in appearance to the common hawker although very slightly smaller.
Identification: This species has truncated, or non-existent stripes on the thorax, separating it from the common hawker. However the most important feature, present in both males and females, is the noticeable widening of the abdominal line at the top, forming a T shape that is not present on the common hawker.
Months active: July – November
Size: 6.3cm

Appearance: Brown-bodied dragonfly with uniform small blue markings along the side of the abdomen.
Identification: The brown, slightly translucent wings on this species are unique in UK dragonflies, making it easy to identify.
Months active: June – September
Size: 7.3cm

Despite the lack of ‘hawker’ in this dragonfly’s name, it is still found in the same family as the previous species and so is regarded as a hawker-type.

Another family of large dragonflies, the Goldenrings are also known as ‘Spiketails’ due to the females prominent, long ovipositors at the end of their bodies. Only one member of this family is currently found in the UK, making identification simple.

Identification: An appropriately named dragonfly with prominent colouration – bright yellow and black stripes down the body are found on both the males and females of the species.
Months active: May- September
Size: 7.4cm, although females can be up to 8.4cm when including their long ovipositor, making them technically the longest species found in the UK.

Chasers and darters are significantly smaller dragonflies than the hawkers and goldenrings, including our smallest species. Appropriately named, these dragonflies tend to perch and then suddenly chase/dart after their prey. Their movement can appear less smooth and instead more erratic than the larger hawkers.

Chasers have rather wide/broad and flattened bodies when compared to the familiar image of a slender bodied dragonfly.

Appearance: A ‘stout’ brown dragonfly with a darker tip to the base of the abdomen.
Identification: As the name suggests, four characteristic spots are present on the midpoints of the wings.
Months active: May – September
Size: 3.9- 4.8 cm

Appearance: Wide-bodied with a striking and beautiful ‘icy’ blue body on male. Females look similar but with a yellowy-golden body.
Identification: A number of other chaser species share the blue colouration, but the broad-bodied is easily the most commonly seen. The dark bases to all four wings is an additional identifying feature.
Months active: May – August
Size: 3.9 – 4.8 cm

Darters are also shorter than the hawker dragonflies but have more slender bodies than the chasers with a ‘cigar-like’ shape.

Appearance: A brightly coloured, red dragonfly with yellow side stripes on the thorax. Females of the species are instead rather uniformly yellow.
Identification: Despite the coloration, this dragonfly looks very similar to many other darter species, in particular the rarer Ruddy darter. These two can be distinguished by the presence of yellow leg stripes, whereas the Ruddy’s legs are purely black.
Months active: July – October
Size: 3.8 – 4.3cm

Appearance: Smallest resident dragonfly. The males are entirely black whereas females are a bright yellow, appearing similar to the females of the common darter.
Identification: The mature male of this species is the only black dragonfly in the UK.
Months active: June – October
Size: 2.9 – 3.4 cm 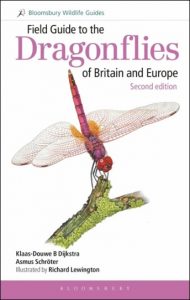 Field Guide to the Dragonflies of Britain and Europe
By: Klaas-Douwe B Dijkstra, Asmus Schröter and Richard Lewington
Paperback | Oct 2020Hardback | Oct 2020Fully revised, the second edition of this guide features updated taxonomic and distribution information, as well as five new species discovered since the first edition in 2006. 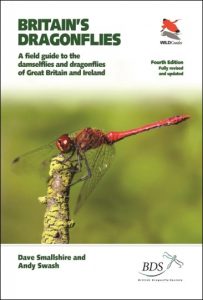