Colloquially known as ladybugs or ladybirds, these species are a well-known part of UK wildlife. Appearing in the nursery rhyme ‘Ladybird ladybird’, as the symbol for Ladybird Books, and in arts and crafts activities at school, they are a familiar sight for most of us from a young age.

Ladybirds are beetles and belong to the family Coccinellidae. There are 26 species in the UK and they can be found in a variety of habitats such as grassland, woodland, and even your garden. There are several ways to survey ladybirds, for instance a sweep net or beating tray can be used to collect ladybirds, or you can fashion your own ladybird catcher by cutting off the top of an old plastic bottle. Holding the bottle upside down, a stick can be used to tap bushes and trees so that ladybirds can fall in the bottle. Please remember to be gentle and to return them to where you found them, or instead search for ladybirds by eye.

Other useful equipment include a hand lens, a field guide that also includes larval stages, and a pen and some paper to note your identifications. You can help broaden our knowledge of populations and distributions by recording your sightings through iRecord or by using the iRecord Ladybird apps.

Identifying ladybirds is usually based on colouration and the number and pattern of spots, although these can sometimes vary between individuals of the same species. In this article, we’ll show several species you may encounter when looking for ladybirds.

What to look for: This species has a bright red wing case with seven black spots, and a black and white pronotum (the hard plate behind the head). There is a very similar species named the scarce 7-spot ladybird (Coccinella magnifica). It is difficult to tell the two apart but the 7-spot has slightly smaller and rounder spots.

Distribution: Widespread across England but rarer in Scotland and Wales.

What to look for: The 22-spot ladybird is one of the smaller UK species. It has a bright yellow wing case with 22 black spots, plus a yellow pronotum with 4 black spots.

Distribution: Scattered populations across Britain, numbers are increasing and can be quite frequent in suitable habitats

What to look for: This species has a more orange-red wing case, with several black spots and two white markings at the front. The number of black spots varies between individuals and can be between 3-15. Their pronotum is black and white, and they have either black or brown legs.

What to look for: This species is yellow, with black, rectangular spots that meet each other, giving it an almost chequered appearance. They can, however, vary greatly in colour and pattern. Their wing cases can have a background colour of cream all the way to a lighter orange. Despite its name, it can have anywhere from 4-14 spots.

What to look for: The larch ladybird is a light tan brown, with muted patterning. There is occasionally a dark line along the back of the wing case where the two sides meet, and the occasional speckling of spots. The pronotum is usually a lighter, beige colour with an M-shaped mark in darker brown.

Distribution: Found across England and Wales, but only in some parts of Scotland.

What to look for: The kidney-spot ladybird is black, with two large red spots, one on each wing casing. There is a distinctly flattened rim around the edge of the wing casing. This species is usually found in well-wooded areas – look on tree trunks!

Distribution: Widespread and frequent across England and Wales, but not in Scotland or Ireland.

What to look for: This species changes colour throughout the year! It has a more beige colouring, except in April-June when it turns a reddish colour. It is an elongated and flattish ladybird, with between 15-21 black spots. As its name suggests, it is usually found by the water, living in reedbeds and wetlands.

Distribution: Widespread in England, spreading in Wales, Scotland, and Ireland.

What to look for: There is a large variation in the appearance of this species. They have brown legs and can have a red, orange, yellow, or black wing casing with up to 21 spots. The black forms usually have between 2-4 spots. Their pronotum may have several spots fused in an M or solid trapezoid shape. They are a large species, at approximately 7-8mm in length.

Did you know? This is an introduced species and is considered invasive, as it outcompetes our native species, such as the 7-spot ladybird, for resources. It even eats other ladybirds’ eggs and larvae!

What to look for: It has a beige colouration, although there are darker forms that appear more yellow or even slightly orange. It can have between 13-18 spots, with three to four fused together forming a line on either side of the wing case. It also has a solid black line down the middle of the wing case, and some spots on its pronotum. 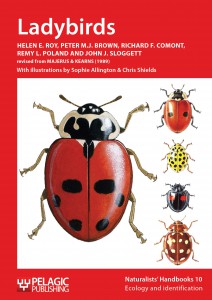 This revised and updated edition of Ladybirds provides a succinct but comprehensive and accessible overview of the biology of ladybirds and their parasites, focusing on ecology in an evolutionary context. 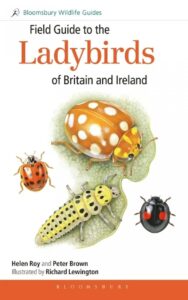 Field Guide to the Ladybirds of Britain and Ireland
Paperback | November 2018
£24.99

This illustrated field guide covers all 47 species of ladybird occurring in Britain and Ireland in a handy and easy-to-use format. Each species account includes a description of field characters, similar species, life-cycle, food source, habitat and distribution. 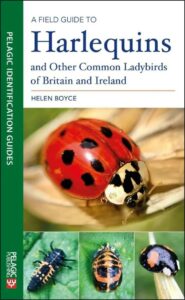 A Field Guide to Harlequins and Other Common Ladybirds of Britain and Ireland
Paperback | March 2021
£24.99

The invasive Harlequin ladybird can be very difficult to identify, with huge variation in colouration and pattern. This comprehensive photographic field guide is the first complete guide to identifying Harlequin ladybirds found in Britain and Ireland.  It also covers all the other 25 conspicuous ladybird species that occur. 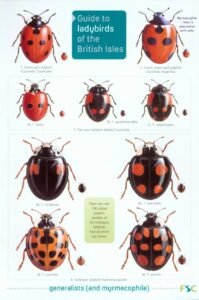 In Britain, some 46 species belong to this family, although only 26 of these are recognisable as ladybirds, all of which are featured in the guide. The guide features clear colour illustrations grouped by appearance to help with identification, with information on colour pattern, habitat and distribution and hints to aid identification provided in a comprehensive table. 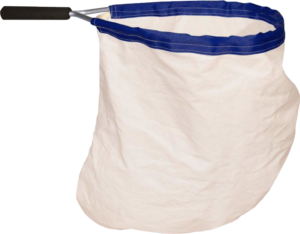 This simple and well-designed sweep net is ideal for students and those new to entomology. It is made from durable fabric and is designed for sweeping through grass or other foliage to catch ladybirds and other bugs. The sweep net is easy to use, the frame is lightweight aluminium, and the soft calico bag attaches to this using strong velcro.

The Opticron Hand Lens contains a high quality 23 mm doublet lens and provides excellent distortion-free magnification. The 10x magnification gives great detail when examining insects and would be perfect for general observations. To use a hand lens, hold it close to your eye then bring the specimen up to the lens until the point where it is in focus.