The NHBS Guide to UK Lichens

Lichens are composites of two or more different organisms, an alga or cyanobacteria living among the filaments of a fungus species. It is a symbiotic relationship where the fungal partner, also termed the mycobiont, makes up the body or ‘thallus’, and the algae or cyanobacteria is the photosynthetic partner, or photobiont, providing nourishment. There is debate as to whether this symbiotic relationship is mutualistic, where both parties benefit and neither is harmed through this interaction, or a type of controlled parasitism, where the mycobiont is ‘farming’ the photobiont for the sugars produced by photosynthesis.

There are over 1,800 species recorded in the UK, and 17,000 species worldwide. There are three main categories of lichen body types: crustose, fruticose and foliose. Crustose lichen are species that form thin, crust-like coverings that are tightly bound to the surface they’re on. Fruticose lichen form coral-like bushy or shrubby structures with a holdfast, a root-like structure that anchors it to trees, rocks or other surfaces. Foliose lichen are species that have a flattened, leaf-like thallus with an upper and lower cortex, the surface layer or ‘skin’ of the lichen, and attach to surfaces by hyphae with root-like structures called rhizines. There are other growth forms, such as leprose (a powder-like or granular appearance), squamulose (scaly), filamentose (stringy) and byssoid (wispy). These can also be divided into numerous subtypes.

Lichens are an important food source for many species, such as deer and goats, and are used as building material for birds nests. They occur from sea level to high elevations, tolerating many different environmental conditions. They grow on a wide variety of surfaces, from tree bark, leaves, mosses, rocks, gravestones, roofs, soil, bones and rubber. The general guidance for identifying lichens is to look at growth form, colour, habitat and substrate type and distribution. You should also look for the presence or absence of certain structures such as rhizines, soredia (scale-like reproductive structures), isidia (column-like outgrowths of the thallus) and apothecia (a cup-shaped structure containing asci, spore-bearing cells). A hand lens and a guide that covers other lichen species will be useful for identifying these.

Spot tests can be performed, which involve placing a drop of a chemical, such as potassium hydroxide or sodium hypochlorite, on different parts of the lichen. Any colour change, or lack thereof, can be used for identification when following dichotomous keys for lichen species. Care should be taken when using chemicals, however, particularly in the natural environment, due to the damage they can cause.

Some species are harder to identify in the field and require microscopic examination or further chemical testing. Additionally, there may be variations in appearance due to weather conditions or the condition of the lichen. Its colour can change when the lichen is wet or in poor condition, for example, or the growth form can appear different if the lichen has begun to disintegrate.

Distribution: Widespread, but most frequently found in upland areas.
Growth type: Foliose
What to look for: This is a small lichen, typically no more than 5cm wide with lobes that are less than 2mm broad and closely pressed against a surface. Their upper surface is orange, with a white lower surface, a cortex (skin), and attached with short, sparse hapters (peg-like structures on the lower surface of lichen). Soredia and isidia are absent but apothecia structures are common.

Distribution: Widespread, more common in the western and southern parts of England, scarce in northern and central Scotland.
Growth type: Foliose
What to look for: This is a pale grey species that turns yellowish-green when wet. The lower surface is black with a brown margin and black, unbranched rhizoids that attach it to the substrate. Its lobes are rounded, around 3–8mm wide, with patches of soredia. The lobes are often wrinkled in appearance, particularly in older specimens.

Distribution: Widespread
Growth type: Foliose
What to look for: Hooded rosette lichen is a pale grey species, with lobes up to 2mm wide that are curled into a hood shape. They have cilia, thin projections from the margin of the lichen, which progress from pale to black at the ends. Soralia are usually abundant and disc-shaped apothecia can also be present. The lower surface is white to greyish. They are attached to surfaces by rhizines, which can be white to black.

Distribution: Fairly widespread
Growth type: Foliose
What to look for: This species is pale, from white to bluish-grey. It has white-rimmed apothecia that have black centres. Soralia and marginal cilia are absent. The lobes also have distinct flecks of white called pseudocyphellae. It grows in well-lit habitats, usually on fences or trees, often in the nodes of branches.

Distribution: Widespread
Growth type: Foliose
What to look for: This species is a yellow-orange coloured lichen that can appear greener when wet. It is a leafy lichen with flattened lobes that are between 1–4mm in diameter. Its lower surface is white and has pale rhizines or hapters. Similarly to X. elegans, soredia and isidia are absent but yellow or orange apothecia are usually present. There is a cortex that is made of tightly packed fungal hyphae, which can be thicker in more exposed locations and is thought to protect the lichen from evaporation and exposure.

Distribution: Widespread
Growth type: Foliose
What to look for: The thallus is grey to greenish-grey, with inflated lobes that lift at the tips. These inflations can burst open, displaying the floury soredia inside. They may have black dots, called pycnidia, near the lobe tips. Rhizines are absent and the lower surface is wrinkled with a light brown margin, darkening towards a black centre. They may have apothecia, which occur on short stalks and have a red-brown disc.

Distribution: Widespread, particularly in heathland, healthy turf and on dunes.
Growth type: Fruticose
What to look for: This species has an upright secondary thallus, called the podetium, which can vary from grey-green to brown. This forms loose mats, and the finer branches are erect and sharply pointed. Soredia are absent, with few to no squamules (scales). They may have small, green areolar patches set into or raised on the cortex surface. The podetia become darker brown and glossy with age. Pycnidia, the asexual fruiting bodies, are small, brown and are found on the branch tips. This species has apothecia, which are brown and occur in extended clusters at the ends of podetia.

Distribution: Scattered distribution, mainly in parts of Wales, south- and north-west England and scattered areas of Scotland.
Growth type: Foliose
What to look for: The thallus of this species is a pale grey or brown when dry but becomes brownish or yellowish-green when wet. It has convex pustules across its upper surface which often appear darker in colour and are covered in a powder towards the centre. The margins of this species are often ragged and can be darkened by the presence of black isidia. The lower surface can be grey, brown or black, and have corresponding depressions to the pustules on the upper surface. Rhizines are absent and this species is attached to substrate by a stalk.

Distribution: Widespread
Growth type: Fruticose
What to look for: They primarily grow on oak trees but can be found on the trunk and branches of other deciduous trees and conifers. This species is flat and strap-like, highly branched (forked) and bushy, forming large clumps when growing together. When dry the thallus is rough and the colour can vary from green to a pale greenish-white. When wet, they appear dark olive-green to yellow-green and are rubbery in texture.

Distribution: Widespread in Scotland and Wales, scattered throughout England, more common in the north and west.
Growth type: Fruticose
What to look for: Pink earth lichen have bulbous pink apothecia that are around 1–4mm in diameter, set on stalks up to 6mm tall, although these are not always present. The thallus can vary in colour between grey or white, occasionally with a pink tinge, and can appear greenish-grey when wet. They are coarsely granular and are sometimes covered in small, white balls up to 1mm in width, with small powdery areas.

Distribution: Widespread in Scotland and north-west England, and the upland areas of England, Wales and Ireland. Less common in the East Midlands, East of England and the South East.
Growth type: Crustose
What to look for: This is a bright yellow to yellow-green species, with a cracked thallus, flat, black apothecia and bordered by a black line of fungal hyphae. This lichen grows in patches adjacent to each other, giving the appearance of a map. 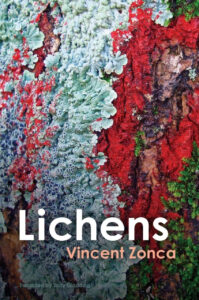 Lichens: Towards a Minimal Resistance

The result of several years of investigation carried out on several different continents, this remarkable book offers an original, radical and, like its subject matter, symbiotic reflection on this common but mostly invisible form of life, blending cultures and disciplines, drawing on biology, ecology, philosophy, literature, poetry, and even graphic art. 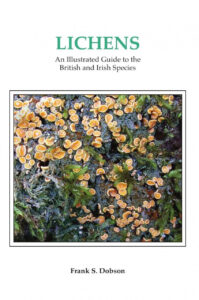 Lichens: An Illustrated Guide to the British and Irish Species

This book provides an invaluable guide to identifying the British and Irish species both for the amateur naturalist just starting to study lichens and the more advanced lichenologist. It offers the environmentalist and ecologist a concise work of reference, compact enough to be used in the field. 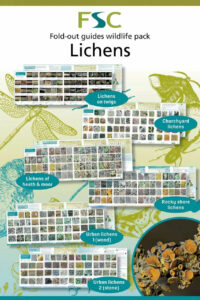 These colourful and widespread organisms can be seen all year round. Featuring six of the FSC’s popular fold-out charts: lichens on twigs, churchyard lichens, urban lichens 1 and 2, rocky shore lichens and lichens of heaths and moors

Each pack includes a card-sized magnifier, so you can get in even closer to the details.

Observe the finer details of your specimen with this high-quality 23mm doublet lens, the most commonly recommended magnifier for all types of fieldwork.

All prices are correct at the time of posting, but may change at any time.
Please see nhbs.com for up to date pricing and availability.