“This tiny bundle of energy in my hand…”: John Altringham talks to the Hoopoe about bats

John Altringham, author of Bats: From Evolution to Conservation, discusses the appeal of bats, what they are, and how we should think about their conservation needs. 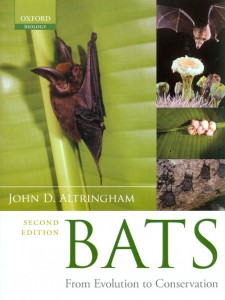 How did you first become interested in studying bats?

I was taken to a Natterer’s bat roost, almost 30 years ago now, and saw my first bat close up. I was a research scientist in biomechanics – trying to understand evolution’s engineering problems and solutions. This tiny bundle of energy in my hand was an engineering marvel I’d never really thought about, so I went away and read about bats. However, I didn’t read just about flight and echolocation, the subjects that came immediately to mind. As a zoologist and conservationist, I read more and more widely and became increasingly fascinated. Bats became an important ‘extra-curricular’ activity, but it was many years before they displaced biomechanics in my work. However, the seeds were most definitely sown during that very first encounter.

We all know what bats are, but – what exactly is a bat?

A bat is the only flying mammal and one of nature’s few echolocators. With these ‘skills’ it has evolved and radiated into the most diverse, the most widespread and the second most speciose group of mammals on the planet. A bat is a small mammal with the lifestyle of its much bigger cousins. It lives a long time, but only produces one baby a year. It lives within often complex social units, exhibiting complex behaviours, and makes use of the landscape on a grandiose scale through the seasons. It shows a bewildering range of ways that an animal can makes its way in the world. It is an important cog in many ecosystems, as predator, pollinator, seed disperser. Its contributions to the human economies of the world are only now being determined and appreciated. Likewise its value as an indicator of the planet’s health. It is a source of endless fascination, study and appreciation.

Why do you think there is such popular interest at this time in bat detection and conservation, and what can we learn from studying their ecology?

Bats are also surprisingly accessible. It is relatively easy, even in suburban areas, to see and hear 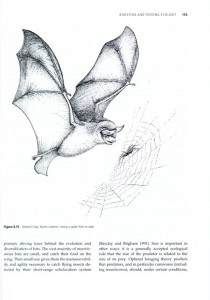 bats, sometimes at fairly close quarters – you can’t say that about many wild mammals. They often live in close proximity to humans, you don’t have to be particularly stealthy, and they just get on with life while you watch – they have a lot to offer the casual naturalist. However, there are plenty of challenges for the more dedicated naturalist.

The need for conservation is pretty self-evident. Bats need large home ranges in connected landscapes, they rely on threatened habitats for both roosting and feeding and they are slow to recover from population setbacks. However, there are modest things we can do to help them, from practical conservation to education, which encourages widespread involvement – and success fuels further effort. Conservation needs passion and commitment – bats appear to have the charisma to generate them.

Conservation gets a big chapter in the book – it is the focus of a large and growing proportion of ecological research. There has been a lot of bridge building between research ecologists and conservation practitioners in recent years, but we still have some way to go. I’ve tried to highlight some of the issues in this chapter – evidence-based conservation is the future!

What can we learn from bats? Where do I start?! Science is all about understanding how the natural world works. Everything we learn, from the ecology of individual species to the general processes that govern the way ecosystems function, comes from the study of appropriate ‘models’. The sheer diversity of bats means that they offer useful models to study all sorts of things – just look at the topics I cover in the book.

How do you see the future for bats? 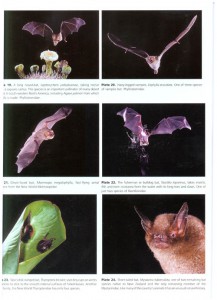 I have no idea what the future holds, for bats or the rest of biodiversity. I do think bats are among the more vulnerable animals, so looking after bats is a good way to protect other animals and plants that share their habitats. We have a growing knowledge about what we are doing wrong to our environment and what we need to do to begin to put things right. However, there is a lack of will among politicians and the ‘captains’ of commerce and industry to provide the conditions and the resources to do it. Lots of talking the talk, little walking the walk. Conservation will always be a compromise – but the balance point is far from the right place. Too many people still think of conservation in terms of what we sacrifice to achieve it, not what we gain from it. We need more objective science in conservation, alongside the passion and hard work. They provide the evidence that forces people to act and they help us to decide how to use most effectively the limited resources we have at our disposal.

NHBS stock an extensive range of bat conservation equipment, supplying a range of customers from ecological consultants needing bulk stock for a construction project, to amateur naturalists keen to investigate their local bat population and do their bit for conservation.

Browse our range of bat boxes

NHBS Customer Services will happily discuss your needs and advise you on the best purchase for your project.