Vaquita: An interview with Brooke Bessesen

In Vaquita: Science, Politics, and Crime in the Sea of Cortez, author Brooke Bessesen takes us on a journey to Mexico’s Upper Gulf region to uncover the story behind the world’s most endangered marine mammal. Through interviews with townspeople, fishermen, scientists, and activists, she teases apart a complex story filled with villains and heroes, a story whose outcome is unclear.

In this post we chat with Brooke about her investigations in Mexico, local and international efforts to save the vaquita and the current status of this diminutive porpoise.

The vaquita entered the collective imagination (or at least, my imagination) when it became world news somewhere in 2017 and there was talk of trying to catch the last remaining individuals, something which you describe at the end of your story. Going back to the beginning though, how did you cross the path of this little porpoise?

I first heard about vaquita during a visit to CEDO, an educational research station in Puerto Peñasco, Mexico. I was enchanted to discover this beautiful little porpoise was endemic to the Upper Gulf of California, mere hours south of my home, yet saddened to learn it was already critically endangered. I still have the t-shirt I bought that day to support vaquita conservation. That was 2008 when the population estimate was 245.

The last update I could find was an interview in March 2018 on Mongabay with Andrea Crosta, director of the international wildlife trade watchdog group Elephant Action League. He mentioned there might be only a dozen vaquita left. Do you know what the situation is like now?

The last official population estimate was <30, but that was from 2016. With an annual rate of decline upwards of 50 percent, the number is surely much lower. If only we were able to watch the numbers go down in real time, we would all be forced to emotionally experience this sickening loss. But I think there is a (legitimate) fear that if an updated estimate revealed the number to be in or near single digits, key institutions might announce the species a lost cause and pull up stakes. If pecuniary support disappears, it’s game-over. Vaquita has graced the planet for millions of years—we cannot give up the battle to prevent its extinction so long as any number remain. 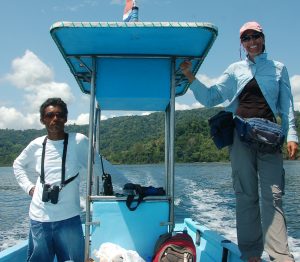 Once your investigation on the ground in Mexico gets going, tensions quickly run high. This is where conservation clashes with the hard reality of humans trying to make a living. Corruption, intimidation and threats are not uncommon. Was there ever a point that you were close to pulling out because the situation became too dangerous?

Truth told, my nerves were prickling from start to finish. The emotional fatigue was intense. But having witnessed the gruesome death of Ps2 [the designation given one of the Vaquita carcasses that washed up, ed.], I simply could not turn back. Then as the humanitarian crisis became clear and I was meeting families struggling to raise children in the fray, I was even more committed to telling this story. When courage wavered, I only had to remind myself of the host of social scientists, biologists, activists, and law-abiding fishermen working so bravely for the cause.

You describe a widespread indifference to the vaquita. I have the feeling a lot of this is cultural. Do you think a change in attitude can ever be effected? Or is the combination of poverty and the need to make a living completely at loggerheads with this?

I see two main obstacles to solving the vaquita crisis: corruption and poverty. In that order, because until local citizens can trust their military and police officers to rightfully enforce law, and until Pesca [Mexico’s National Fisheries Institute and its National Commission of Aquaculture and Fisheries, ed.] authorizes legal, sustainable fishing methods instead of providing loopholes for poachers, there will be no economic stability in the region. Money is pouring into the pockets of crime bosses while upstanding folks barely get by. Focused on either greed or survival, nobody has much capacity to care about porpoise conservation. That said, I do believe change can be effected. Several NGOs are already connecting with the communities in meaningful ways, and mind-sets are slowly shifting. If Mexico’s president-elect Andrés Manuel López Obrador, who goes by the nickname Amlo, manages to abolish corruption as he has promised to do, civic finances will balance out and efforts to care for vaquita will find better footing. 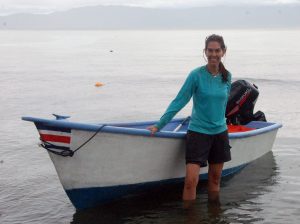 As the story progresses, more and more foreign interests enter this story. Sea Shepherd starts patrolling the waters, and Leonardo DiCaprio also gets involved, signing a memorandum of understanding with the Mexican president to try and turn the tide. What was the reaction of Mexicans on the ground to this kind of foreign involvement? Are we seen as sentimental, spoiled, rich Westerners who can afford unrealistic attitudes?

Since the majority of environmentalists working in the Upper Gulf are Mexican, and even Leonardo DiCaprio had the alliance of Carlos Slim, the socio-political divide does not seem to be so much between nationalists and foreigners as between fishermen and environmentalists. Fishermen who openly expressed distain for “outsiders” disrupting business meant Sea Shepherd, for sure, but they also meant scientists and conservationists from places like Mexico City, Ensenada, and La Paz. Some of the locals I spoke with or followed on Facebook did seem troubled by the amount of resources being spent on vaquita while their own human families suffered. They felt the environmentalists were not appreciating the strain and fear of their jobless circumstances. Then again, a good percentage voiced gratitude for the efforts being made to protect vaquita as a national treasure and seemed to feel part of an important crusade for their country and their community.

Related to this, the West has outsourced the production of many things to countries overseas and so many of us are far removed from the harmful impact that our desire for food and stuff has on the environment. Deforestation in the Amazon to graze livestock for hamburgers is one such long-distance connection that comes to mind. The vaquita has also suffered from the impact of shrimp trawlers. No doubt many who shed tears over the vaquita will happily gorge themselves on said shrimps without ever making the link. Do you think that globalisation has in that regard served to polarise the debate where wildlife and nature conservation is concerned?

Yes, this is a really important point. It’s easy to point fingers, but we are all complicit in the destruction of ocean life. Anyone who eats fish or shrimp caught in gillnets—or trawls, or longlines—is funding the slaughter of cetaceans and sea turtles and myriad other animals. It’s a painful truth. The root of the problem is that most of us don’t know, and don’t care to ask, where the seafood on our dinner plate came from. This is not intended to be accusatory, as I, too, am finding my way in this era of culinary disconnect. I just know the first step is to quit pretending we are bystanders. 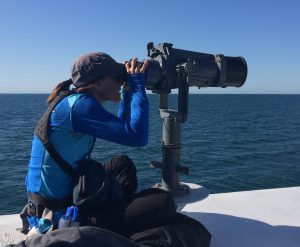 One side of the story I found missing from your book was that of the demand for totoaba swim bladders in China. I imagine it might have been too dangerous or time-consuming (or both) to expand your investigation to China as well. How important and how feasible do you think it is to tackle the problem from that side? Without a demand for totoaba bladders, the vaquita wouldn’t face the threats of gillnets after all.

I think it’s imperative to attack the totoaba trade from the consumer side, with the goal of systematically eliminating the demand for swim bladders. As for feasibility, I’m less confident. Time and distance prevented me from effectively researching the situation in China, but from what I’ve read, the cultural, political, and economic trappings there are just as complicated as they are in Mexico. I’m pleased to know efforts are underway. It also must be said, though, that ending the totoaba trade is not a sure-fire resolution for vaquita because fishermen in the Upper Gulf traditionally use gillnets for a range of legal fish.

With the book now written, are you still involved in efforts to protect the vaquita?

Knowing what I know now, it’s unthinkable to walk away from vaquita. I was down in San Felipe last month, exchanging summer c-pods and catching up on the latest news. Everyone is nurturing the flicker of hope that Amlo will take action to save his national marine mammal by cleaning up the corruption that has stymied vaquita conservation.

Vaquita: Science, Politics, and Crime in the Sea of Cortez is due for publication in September 2018 and is currently available at the pre-publication price of £19.99 (RRP £22.99).